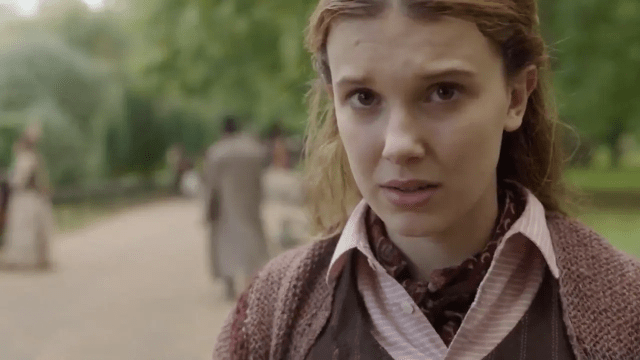 Just a few months after the mind-blowing fourth season of Stranger Things concluded, Millie Bobby Brown is back on Netflix next month for the second installment in her other major streaming franchise. Namely, Enola Holmes 2, which will see the star return as the eponymous Enola, the less famous but equally gifted sister of Sherlock. And while the impact of Stranger Things 4 will be tough to top, this first clip from the new movie indicates it’ll beat out the recent season in one respect, at least.

As shared by Netflix, the minute-long sneak peek sees our heroine out of her depth for once ⁠— after she finds herself attending a high-society ball while on the trail of her latest mystery. Thankfully, her old friend/potential beau Lord Tewkesbury (Louis Partridge) is also in attendance, so Enola strong-arms him into teaching her to dance. Cue a brief waltz lesson that’s loaded with so much romantic tension it’s like a junior edition of Bridgerton.

In other words, this clip promises us that Enola Holmes 2 will offer lots of material for those invested in the Enola/Tewkesbury relationship to feast on. In contrast, Stranger Things 4 somewhat short-changed the dynamic between Brown’s more famous on-screen pairing, that of Eleven and Finn Wolfhard’s Mike, as the teen couple was kept apart throughout much of the season. It seems Enola enthusiasts don’t need to worry about that happening again in this film.

Having said that, it’s not all going to be about Enola and Tewkesbury as the trailers have made clear that Brown’s adolescent investigator will spend more screentime with her big brother this time around, too, allowing Henry Cavill a bigger chance to shine ⁠— something he was keen to embrace so he could really nail his interpretation of the Great Detective.

Enola Holmes 2 detects its way onto Netflix on Nov. 4.