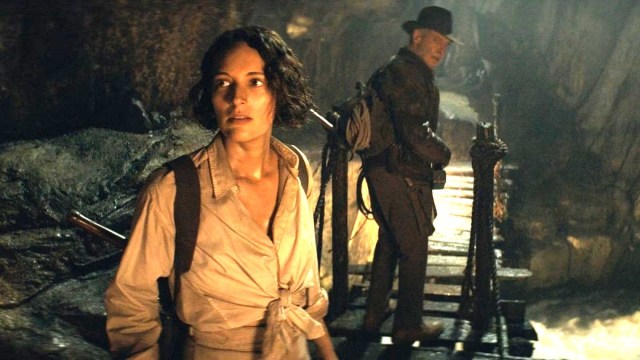 Photo via Lucasfilm
Review of:

Even though the mere mention of Kingdom of the Crystal Skull is enough to send a shiver down the spine of the movie’s detractors, the buzz for Indiana Jones 5 is nonetheless gradually starting to build.

Director James Mangold promised a first look at some long-awaited footage sooner rather than later, with the smart money on a teaser trailer coming attached to Avatar: The Way of Water. We’ve already seen Harrison Ford looking as iconic as ever in the title role, along with Mads Mikkelsen’s Nazi villain, but a brand new batch of snaps have now arrived to whet appetites even further.

Empire Magazine dropped the goodies in a huge feature on Indiana Jones 5 in the latest issue, but outside of the new characters, fresh allies, and shady antagonists on display, we’d be lying if we said we weren’t the most excited about seeing the iconic adventurer tackling a rope bridge once again.

Some things are key to making Indy feel like Indy, and you can be damned sure a rickety rope bridge that serves as the backdrop to an action sequence is definitely one of them. The title hero needs his trusty fedora, legendary whip, and that twinkle in his eye, but it doesn’t mean a thing if he doesn’t find himself wrapped up in a quest worthy of the franchise’s iconic status.

Fingers crossed that Indiana Jones 5 can deliver the goods, even without Steven Spielberg at the helm for the first time ever, because multiple generations would be crushingly disappointed were he to ride off into the sunset on the back of an underwhelming last, last crusade.