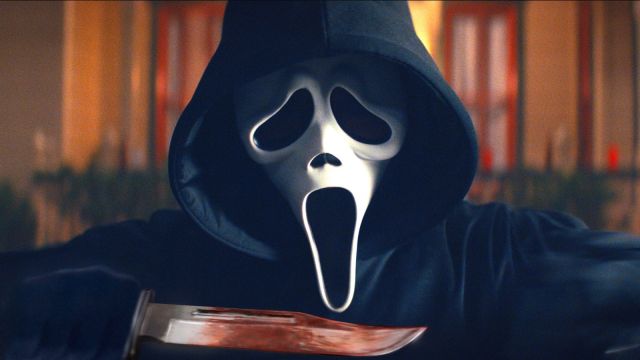 Scream looks set to move locations drastically thanks to the new set photos from Scream 6, with Ghostface seen brandishing a shotgun in what looks like a New York convenience store.

Scream saw a big return in early 2022 with its fifth movie, as Neve Campbell and Courtney Cox both returned to their iconic roles. While Campbell won’t return as Sidney Prescott due to a pay dispute, there’s nothing stopping its slasher Ghostface from wreaking havoc yet again on the world.

Scream 6 has seen one of its first looks unveiled of Ghostface, with him armed with a pump-action shotgun in a small convenience store setting. The image lines up with previous looks at the film which saw Jenna Ortega and other co-stars on the same set. Ghostface having a shotgun is an interesting twist, considering his iconic tool of the trade is a buck knife.

The reaction to Ghostface turning to guns has been surprisingly positive, with it an actual evolution of the character’s methods. Though it must be asked, did Ghostface have to go through a mental health check in order to get his gun? Did he steal it off someone? Did he purchase it while in full costume?

Scream 5 was a huge hit for Paramount, with it a rare case of a January release doing well – especially in horror. The first month of the year is traditionally a dumping ground for movies the studios just want to get rid of. Especially as Christmas has become a more valuable release window, January typically feeds off the scraps.

Grossing $140 million from a budget of $24 million, it outgrossed rival Halloween Ends but was beaten by Smile as the highest grossing horror film of 2022. Scream 6 is currently set for a March 10, 2023 release date.