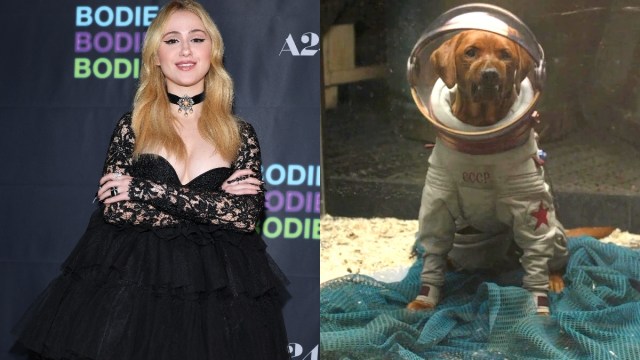 Maria Bakalova experienced a stratospheric rise to fame, which was made even more impressive by the fact her star-making turn in Borat Subsequent Moviefilm never even saw the inside of a theater, and she’s now poised to debut in the biggest and most successful franchise in history when James Gunn’s Guardians of the Galaxy Vol. 3 comes to theaters next May.

It’s been a remarkable ascendancy to say the least, and in an interview with Discussing Film, Bakalova admitted that the opportunity to work with writer and director Gunn on his trilogy-closing cosmic comic book caper was an opportunity she simply couldn’t turn down.

“I love James Gunn, I want to work with him for the rest of my life! He’s just everything. I don’t even know how to say it, he’s so talented. He’s so funny. He’s so fun. He’s such a great human being. What an example of a person that I’d want to be like. His dedication to his craft is admirable as well. It’s just phenomenal. I’ve been very lucky to meet him and to have a chance to work with him. I want to do it again and again.”

The actress was somewhat surprisingly revealed to be voicing Cosmo the Spacedog in Vol. 3, but it sounds as though Bakalova was suited and booted in a motion capture leotard, and not just restricted to the recording booth in order to bring the intergalactic traveling canine to life.

“Yes, I was in mo-cap. I think that’s the only thing I can share so far… it’s been amazing. I’ve been a fan of the Marvel Cinematic Universe, alongside being a fan of Dogme 95, the movement created by Lars Von Trier and Thomas Vinterberg. Yes, they are two completely different things, but important to me. So having the chance to join the family of Marvel and especially the Guardians of the Galaxy, which was my first love in the MCU, was a dream come true.

I love seeing all the people excited for Vol. 3, the fans have been so welcoming and warm. It’s truly precious and reminds you why you’re actually doing this kind of work, to make people feel something. I think that’s the biggest gift. Yeah, we need some puppy love in it! We need something like that out there. Cosmo created a new world for me. So I hope people will root for her and enjoy it.”

We’re nothing if not curious to see how and why Cosmo fits into Guardians of the Galaxy Vol. 3, especially when Bakalova has taken things one step further then voice-only colleagues Vin Diesel and Bradley Cooper by actually setting foot on set.