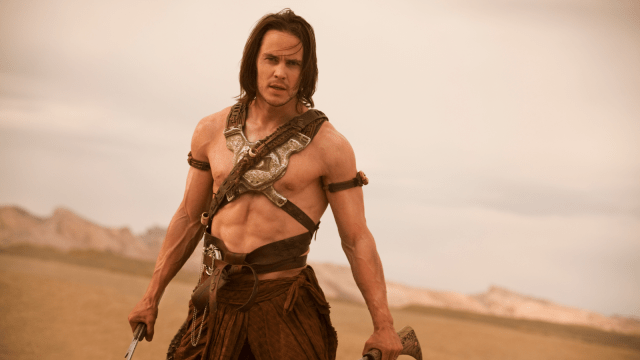 It’s been ten years since the theatrical release of Disney’s sci-fi epic John Carter.  After its cliffhanger ending, you’d have been forgiven for thinking that the film would see some sequels, especially considering there was plenty of source material left over in Edgar Rice Burroughs’ writings.

It’s certainly a puzzling prospect – why would Disney have injected so much money into director Andrew Stanton’s vision, only to pull the plug and never see any sort of follow-up see the light of day? Surely there’s something in the works? Heck, even Bryan Cranston is disappointed that nothing else came to be for the franchise.

As a quick refresher, 2012’s John Carter ends with the titular character revealing his elaborate ruse to find a Thern’s medallion after staging his death, and succeeds in luring a Thern out of hiding, by effectively using Edgar Rice Burroughs as bait. He then uses the dead Thern’s medallion to return to Barsoom, and presumably the story would have picked up shortly afterwards whenever a John Carter sequel happened.

Stanton would have loved to created a trilogy of John Carter films had Disney greenlit them, and he even had thorough narrative plot points in place to make them happen. Per Stanton’s conversation with The Wrap, the second film (tentatively titled Gods of Mars) would have opened in a similar fashion to the first film – with narrated prologue. Only this time instead of Willem Dafoe’s character Tars, it would be delivered by Lynn Collins’ Dejah, recapping the events of the first film to her child.

Gods of Mars would have been a rescue mission of sorts – with Carter returning to Barsoom around a decade after the events of the first film, only to discover that his wife Dejah and son are missing. Carter would track them to an underground city run by the Firstborn. Eventually, Carter would reunite with his family, and the Red, Green and Firstborn would join forces to overpower the Therns.

Stanton’s third film would have been titled Warlords of Mars, and would have seen the Therns masquerade as leaders of the various Martian races and incite infighting between the factions, while Carter and his family raced against the clock to prevent all out war and discover the impostors. Carter would have eventually had a showdown with Matai, who he would triumph over and become the titular Warlord of Mars.

Alas, while Stanton had a framework in place for follow-up films to the 2012 original, they would never come to pass. Despite making $281 million at the worldwide box office, the massive production budget the film had ($307 million) led to the film generating an overall net loss for Disney. As such, the company wasn’t about to take a risk on creating followup films only for those to flop at the box office too.

Many speculate that an ineffective and confusing marketing campaign was a primary factor which led to the film’s downfall. While Stanton was credited with Finding Nemo and Tarzan previously, no mention was made of the director’s abilities and successes with previous works. The director was also asked to drop any mention of Mars from the film’s title.