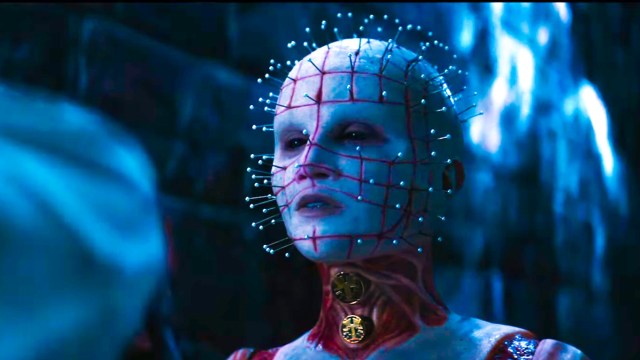 Earlier this month, the Hellraiser movie came out, rebooted the series and returned it to critical praise. Though no sequel to the project has been announced as of yet, the director is on board and now a star has said they want to be a kinky demon once again.

Jason Liles (the Chatterer Cenobite) makes the comments about his …. meaty role in a new article published by Screen Rant. The actor says even the writers have ideas for more and even if his character does not get stuff to sink hooks into again, he is willing to come back as a different character in the world of puzzles, leather and probing insights into the intersections of pain and pleasure.

“I’ve talked with David about it, and I just told him, ‘look, if Chatterer somehow comes back, let’s make it happen. If he doesn’t, I want to be something else. I just want to come back to this world.’ And I know David has said in interviews that he’s ready to make a sequel. He’s ready to make sequels, and the other writers have said that as well. Ben [Collins] and Luke [Piotrowski], they’ve been like, ‘man, we would love the chance to do another one.'”

Later in the article, Liles adds everyone involved feels they can top themselves in the future and it would be fun to do. As well, there are a lot of different areas to get right, but, he feels it would be interesting to see done and he has hope for more in the IP.

“I think everybody involved in all their lanes of making this feel that they can do whatever they did on that one even better on another one. I learned a lot from it, and I know David’s talked about that. It’s a lot, having to juggle all these different areas; all these different departments, all the practical effects, and dealing with the timing of it. So, I would really love to see what David and the writers and the entire team come up with for the story. Hopefully, we get to come back and dive into that world a little bit more, now that fans are wanting a sequel. I think that’d be so much fun.”

Hellraiser 2022 is available to stream on Hulu. It currently has a 67 percent fresh rating on Rotten Tomatoes. This makes it the most well-received entry in the series since the first in 1987 and earlier entries have had the characters be a part of a video game, go to outer space and be the tormenters of a person who did not realize they were actually in Hell. Crossovers with other horror properties were also planned at certain points, though these did not ultimately come to pass due to a number of plan issues.