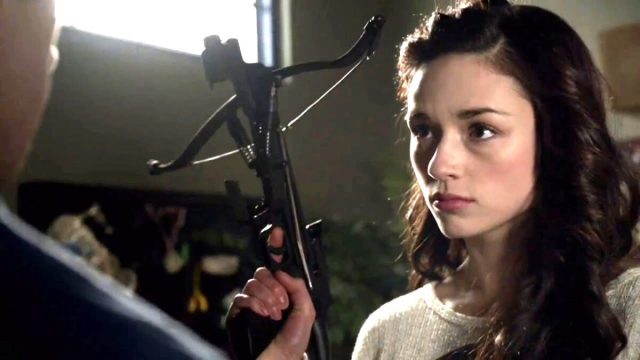 January 2023 will deliver the streaming event of the year for honorary Beacon Hills residents ⁠— Teen Wolf: The Movie, the feature-length revival of the beloved supernatural drama that originally ran for six seasons between 2011-2017. Not only will the movie bring back everyone who made it to the end of the show (well, almost everyone), it’ll also feature someone we never thought we’d see again in this universe.

Yes, Crystal Reed is back as Allison Argent, defying all expectations as the series’ first leading lady was actually killed off back in season 3. Paramount Plus knows that Allison’s shocking resurrection is a big deal, too, as her comeback and the mystery surrounding it is being used as a major hook in the marketing for the movie.

So while we wait for Teen Wolf to howl its way back onto our screens, let’s make like Stiles and create our own evidence board as we ponder the question: how is Allison alive again?

How did Allison die in Teen Wolf?

But before we do, just to make sure we’re all up to speed, let’s recap how Allison died in the first place.

The romance between Scott McCall (Tyler Posey) and Allison was your classic Romeo & Juliet scenario, albeit given a supernatural twist. He was a werewolf while she was the latest spawn of a family of werewolf hunters. By season 3, however, the duo had split up, although they clearly both still cared for each other deeply.

Tragically, Allison met her end while battling an army of Oni commanded by the nogitsune, an evil kitsune (a trickster fox) spirit that had possessed Stiles (Dylan O’Brien). After being stabbed through the chest, Allison died in Scott’s arms, telling her former boyfriend that she always loved him. Even though he later goes on to date both Kira (Arden Cho) and Malia (Shelley Hennig), Scott carries the memory of Allison around with him for the remainder of the series.

And yet, outside of a cameo in season 5 as Allison’s ancestor Marie-Jeanne Valet, Reed never returned to her role… until now. So how could Allison be back? Here are the two most common theories:

Theory #2: Allison is from another timeline

For starters, some fans think Teen Wolf is about to take a page out of Marvel’s book and go all multiversal by introducing a different version of Allison from another timeline. In the first clip ⁠— see above ⁠— from the movie, we see an impossibly resurrected Allison hunting down Derek (Tyler Hoechlin) and his son Eli (Vince Mattis).

Given her cold and emotionless behavior here, which is very in keeping with the traditional Argent mindset, many believe this Allison has somehow crossed over from another reality where she never met Scott and so never came to view werewolves as more than just monsters. Outside of the clip, the other major piece of evidence for this theory comes from Crystal Reed herself. Here’s the potentially highly telling tease she gave to Entertainment Weekly:

“It’s been 10 years since the pilot so I didn’t know how to approach her, and also, I can’t give anything away but she’s a version of herself [that] we had to create that as well.”

Theory #1: Allison is possessed by the Nogitsune

Others, meanwhile, think the multiversal angle is too wild even for Teen Wolf and are instead looking to the show’s own past for answers. The most widespread and popular theory concerning Allison’s resurrection goes that she’s actually not herself at all and her body has been possessed by the being that was responsible for her death in the first place, the nogitsune.

Season 3’s nogitsune arc is perhaps the most popular of the entire series, with the evil fox often deemed to be the most formidable villain Scott’s pack ever faced. So it would definitely make sense to bring it back for the movie, to ensure the stakes are as high as can be. The nogitsune is also practiced in hitting Scott and his friends where it hurts, so using Allison’s form would for sure be in its wheelhouse.

Despite the convincing nature of this theory, however, it remains a controversial one, as some aren’t overly keen on the idea of the movie rehashing old plotlines and especially about bringing back the nogitsune without Void Stiles ⁠— arguably the reason the character was so successful the first time was due to O’Brien’s sinister performance. Would Void Allison hit as hard?

We’ll find out the truth behind the return of Allison when Teen Wolf: The Movie scratches its way onto Paramount Plus on Jan. 26, 2023.