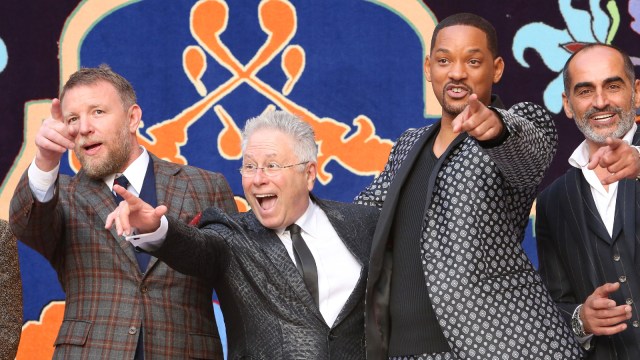 Some fans might get a bit animated over how Disney is going about its live-action remakes.

After the soaring success of Aladdin, grossing more than $1 billion worldwide despite all the jokes about Will Smith’s genie, some questionable casting choices, and critiques of the live-action movie’s director.

The guy who directed the biggest live-action remake to date, Guy Ritchie, has already been bestowed with another Disney live-action movie, bringing the previously animated Hercules to reality, as was announced earlier in June.

As there was a sequel to the animated Aladdin movie, there too will be a live-action sequel.

However, with all things movies the past couple years, production and release dates have been pushed back into the future, but there is one thing we know for certain, as of now: Ritchie will be back behind the camera to make the live-action magic happen.

At the time Aladdin 2 was announced in 2020, it was declared that Ritchie would direct the sequel as well, according to The Hollywood Reporter.

Yet, since then, there has been no official word from either Disney or the director himself to 100% confirm that news, especially as we’ll likely be waiting a couple or few more years before the sequel makes its way to the theaters.

Seeing as they just gave him Hercules, it would be strange if for some reason he didn’t get Aladdin 2 as well.

Additionally, if there was a different director taking over, it seems like that news would have hit by now, so more likely Disney and Ritchie are waiting to see what the final script looks like and looking to find time in Ritchie’s now-busy schedule.

We’ll go out on a limb and say he will take the project, and it will be his third installment in live-action Disney remakes by then. With that the case, we’re betting that Ritchie will have learned — good and bad — about the process of making Aladdin, and he’ll have a chance to perhaps flex some more creativity for Hercules that could carry over to Aladdin 2 topping even its predecessor.

Why wouldn’t Aladdin 2 be a heist movie? Or perhaps Aladdin and Jasmine travel to a whole new world where they run into some street toughs from Britain and now they need to either win them over or defeat them (or both).

Though there’s still a lot to figure out, at least the project has been announced and some involved with the original are still hoping they’ll get the call for the sequel.

Let’s start at the top, and perhaps the biggest question looming considering the, um, controversy Smith struck up — literally — earlier this year.

As of now, there is no announcement that anyone will replace Smith as the beloved blue Genie for Aladdin 2, but there’s also no confirmation that he’ll definitely be on board after several other projects decided to drop him or distance themselves from him following the slap seen ‘round the world at the Oscars.

For (almost) sure, Mena Massoud and Naomi Scott will be back as Aladdin and Jasmine, respectively, because what would the movie be without its two main characters? A total spinoff? You can’t recast them…can you?

In an interview with screenrant.com, Massoud commented on the impending Aladdin sequel.

“They’re working on it. They’re trying to make it happen. That’s really all I know. As you know, usually actors are the last piece of the puzzle, so the studio has got a lot to worry about before they start thinking about the actors,” Massoud said. “Obviously, I would hope that all of us come back and Naomi, Will and I all come back and the rest of the cast, Marwan, Navid, Nasim, everybody. But right now, as far as I know, they’re just working on the script and trying to make it happen.”

Being that we originally reported that the Aladdin live-action series will become a trilogy (the animated series was a trilogy as well, even though the sequels were straight-to-video back at a time when there was no streaming).

Even though there is an Aladdin animated sequel to base a live-action sequel off of, that will not be the case.

The Return of Jafar is reported to not be the source material for the live-action Aladdin 2, but instead writers Andrea Berloff and John Gatins will have a chance to write all-new script material for this sequel. Whereas Ritchie had to stick relatively close to the original animated Aladdin for the first live-action movie, now he will have a real chance to go really deep into his bag of tricks and pull off something we haven’t seen before.

Berloff is best known for her writing on the films Straight Outta Compton and The Kitchen, while Gatlin was on board for Flight and Real Steel.

It’s been widely reported that the script will find inspiration from numerous places, including One Thousand and One Nights, which brought forth some already known characters and storylines such as Sinbad the Sailor and Ali Baba and the Forty Thieves.

The original film’s producers, Jonathan Eirich and Dan Line of Rideback, are also back in the fold for the movie.

“We are going to treat it the same way we treat the original Aladdin movie and not going to do a shot by shot remake of anything that’s been done before,” Lin told comicbook.com back when the news hit. “We’re really looking at what’s been done before in the past and the home video, and there’s just more story to tell with the underlying materials. So without giving away too much, we are certainly exploring where we can go with this franchise.”

As for Smith returning as Genie, that’s up in the air on many levels.

At the end of the original live-action Aladdin, Genie is no longer a genie but instead a human with a family sailing around the world. So, either he has to encounter some situation that makes him become Genie again, or find some other source of getting in on the action.

That means Genie could just be left out. Or, if he is in in the sequel, it could be someone else taking Smith’s place.

And remember, there’s an Aladdin spinoff coming focused on Prince Anders for Disney Plus that was announced a while ago as well, but is just now starting to come in to focus.

Just a few months ago the star of the series, Billy Magnussen, who played Prince Anders in the Aladdin movie, said that the live-action spinoff is a go three years after it was announced. So, Aladdin 2 is right on schedule then.

“It’s in development. We are in the stages of rewrites right now, and it’s still moving forward. Yeah, it’s really exciting,” he told Screen Rant. “I loved making that character up, and to have the opportunity to create a world and a story with him in it has really been a treat. I love that. That’s what I really love about this industry; to play in such a way like that … To be the not-Prince-Charming Prince, you know? We always see Prince Charming, so I was like, ‘Let’s mix it up.”

Seeing as Disney has its hands full with live-action remakes it’s no wonder Aladdin 2 hasn’t had any urgency to get made. We still have Pinocchio, Snow White, Bambi, and The Little Mermaid on the horizon, not to mention Cruella 2, Lion King 2, Jungle Book 2, and more.

We’re guessing if the script is good enough, we’ll start to get some details after the summer on Aladdin 2.