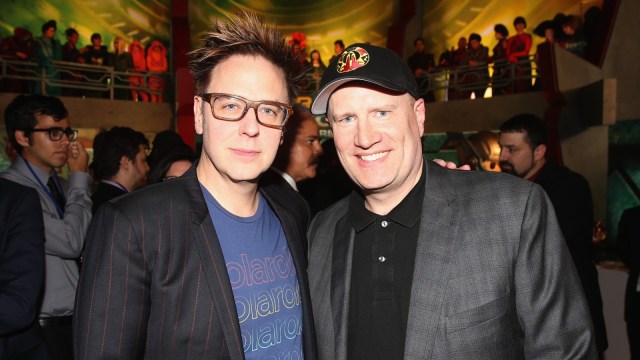 Now that James Gunn has been named one of the bosses for Warner Bros. Discovery’s DC Studios, many have wondered how quickly he told Marvel boss Kevin Feige and whether the two are friends.

“Not only do I love Kevin, he was the 1st person I told after I did the deal with DC (@JohnCena was the 2nd),” Gunn said in a Twitter post.

Gunn went on to explain that the relationship between DC Studios and Marvel Studios is not quite as contentious as one might assume, despite technically being business rivals.

“Contrary to popular belief, a dollar less for Marvel is not a dollar more for DC. DC & Marvel have the common goal of keeping the theater-going experience vibrant & alive!”

The notion that a rising tide raises all ships when it comes to the success, or lack thereof, of comic book movies, is certainly an interesting dynamic to think about. It makes us wonder whether that Burger King restaurant located directly across the street from a McDonald’s isn’t as much a ploy to benefit both businesses, in the grand scheme of things, as it is for one to have a competitive edge over the other. Guess that’s game theory for ya, we suppose.

Gunn achieved a milestone in his career by directing the box office smash film Guardians of the Galaxy for Marvel in 2014. After helming the sequel, he was temporarily fired from Marvel for old, offensive tweets; essentially low-brow jokes that were made in poor taste. Feige was the person who broke the news to Gunn that he had been let go by Marvel, but it was from a decision by a higher-up at the House Mouse.

During Gunn’s brief separation from Marvel, he was hired by DC to direct The Suicide Squad. However, Gunn was then rehired by Marvel to helm Guardians of the Galaxy Vol. 3 after cast members from the franchise heavily petitioned for the director’s return. However, after Gunn’s promotion at DC, it seems he will be a talent exclusive to that company once his duties with Guardians 3 wrap up coinciding with the film’s release to theaters on May 5, 2023.

With Gunn at DC and Feige at Marvel, and the pair supposedly being chummy with each other, it all makes us wonder whether a Marvel/DC crossover film isn’t so far-fetched, after all.