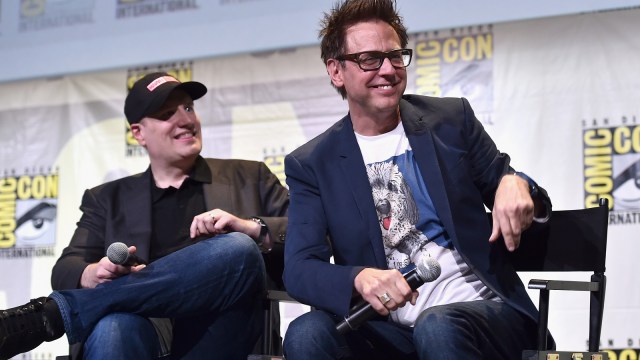 The massive reverberations to be sent throughout not just Warner Bros. Discovery and the recently-rebranded DC Studios, but the entire comic book genre, can all be traced back to a phonecall that was ironically made by none other than Marvel Studios chief creative officer Kevin Feige.

The architect of the Marvel Cinematic Universe was the one tasked by the powers-that-be at Disney to tell James Gunn he’d been fired as the director of Guardians of the Galaxy Vol. 3 after some unsavory tweets from his past resurfaced, which almost instantly had WB offering the filmmaker any property of his choosing.

After directing The Suicide Squad and creating HBO Max smash hit Peacemaker, Gunn was recently appointed as co-CEO of DC Studios, giving him creative oversight and a huge amount of influence over the shared superhero saga’s current and upcoming slate of in-development projects. He might be rounding off his MCU tenure with a Disney Plus Holiday Special and next summer’s Vol. 3, but in something ripped straight from the pages of the comics – Feige appears to have accidentally created his own arch-nemesis.

Think of how many blockbusters revolving around costumed crimefighters involve a two characters who begin as close friends or colleagues, only for a difference in opinion or ideology to ultimately drive a wedge between them that finds them going head-to-head in a battle for the ages. Sound familiar?

If Feige hasn’t fired Gunn, then who knows that the current complexion of the DCU would look like. In a public forum he sounds thrilled for his new opposite number, but anyone who’s read a few comics or seen a few movies knows that there’s regularly a fallout. Then again, maybe the brains behind cinema’s biggest-ever franchise got so bored of winning a one-sided superhero war that he decided to create his own competition, which sounds so far-fetched and megalomaniacal that we hope it’s true.