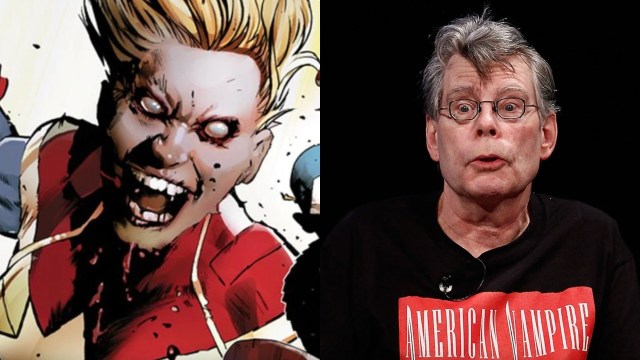 Happy Friday, horror junkies! We’re officially two weeks into October, and the spine-tingling spooky season is only just getting started. And with cinematic staples like Hellraiser and Halloween Ends being released to the horror-loving masses this past week, it’s certainly safe to declare that the hefty amount of terror-stricken content is now set to high gear. With that being said, there’s undoubtedly plenty of newsworthy headlines to share when it comes to the ever-popular genre. Specifically, the mega Marvel fandom has stretched out its arms and successfully glided into horrorland, all while horror legend Stephen King has offered his own praise for Halloween Ends.

So, grab your bag of chocolate-flavored popcorn and follow along as we dissect the latest updates in horror, piece by spooky piece.

With Halloween Ends officially releasing into horrorland today, Oct. 14, diehards are itching to follow, read, and dissect every review that is being pumped out into the media. As of this writing, the movie’s critics’ score on Rotten Tomatoes isn’t exactly appealing, with many film disparagers criticizing an abundance of elements in Ends. On the other side of the spectrum, horror icons like Halloween (1978) director John Carpenter and macabre master Stephen King are hushing the multitude of critics by offering their own forms of praise for David Gordon Green’s modern project. And as we’ve learned in the past, when King himself steps up to dish out reverence, it’s certainly more accurate than not.

Who let the Marvel Zombies out? We’re ready for the gory MCU and horror mashup

It’s certainly no surprise that Werewolf by Night, Marvel’s latest bingeable adaptation, has become a sure-fire hit with not only Marvel mavens but horror fanatics as well. Unlike other MCU projects that focus solely on one-dimensional superheroes and their antics, WbN leans toward a more terrifying, black-and-white horror environment that perfectly juxtaposes two entertainment products that are arguably the most popular at this current point in time. Specifically in 2022, the horror genre has reached new, unbelievable heights, while the MCU has continued to enjoy success from recently released films like Doctor Strange 2 and series like She-Hulk. Now, an upcoming project is set to combine the two elements once again, this time for Marvel Zombies — and let’s just say we can hardly wait.

The modern bubble of cinematic horror is undoubtedly chock-full of reboots and remakes — many of which have been decently praised and accurately recreated. Still, most of these recreations are films that have been championed to be redone for decades, while less-favorable low-budget movies like Phantasm (1979) have been left in the proverbial dust and forgotten about — until now. Luckily for the sci-fi flick, horror fanatics on Reddit have refused to let the iconic slasher just fade away into the shadows. Instead, genre diehards are adamant that the ‘79 film deserves a reboot in the similar style of Hellraiser — which we can hardly complain about.