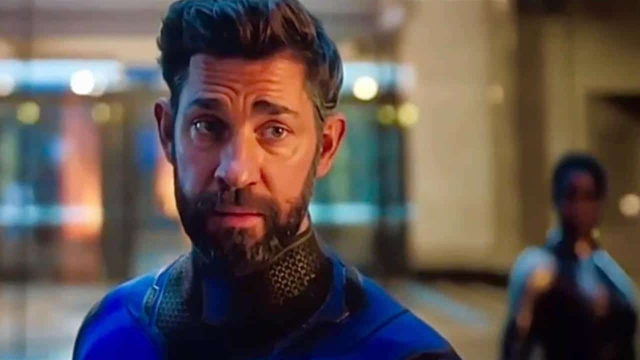 Let’s get cracking with a roundup of the biggest Marvel universe news to drop this Monday. Following on from the exciting announcement that WandaVision director Matt Shakman is in talks to helm the Fantastic Four reboot, MCU lovers have been experiencing a range of reactions to reports that the studio has now found its Reed Richards. Meanwhile, She-Hulk: Attorney at Law looks to have secretly added a special guest star to its cast. Well, it’s not so secret anymore…

Word on the street is that You star Penn Badgley — not John Krasinski — is the frontrunner to play Mr. Fantastic in Fantastic Four, according to intel claiming that Badgley has met with Kevin Feige to discuss the role. We’ll find out the truth when Marvel makes a big announcement about the film at September’s D23 event, but for now folks seem split on Badgley’s potential casting, with some loving it and some Kransinski loyalists baying for his blood.

The MCU looks to have found its newest hot girl in the form of Megan Thee Stallion. In a profile piece on the multiple Grammy-winning superstar, The Cut casually dropped the news that she’s set to feature in She-Hulk: Attorney at Law. Fan detectives may have known this was coming for a few months, but now the news has been pretty much officially confirmed. So look out for a surprise team-up between Meg and Jennifer Walters as the show continues Thursdays.

Who is Spider-Man’s true nemesis? Is it Green Goblin or the Ol’ Parker Luck, the streak of bad karma that has plagued the friendly neighborhood hero ever since 1962? Why is the wallcrawler so unlucky? A fascinating new fan theory, drawing from the Spider-Verse concept of the Web of Time, may just provide the answer. And apparently its Peter’s beloved spidey-sense that may be to blame. Say it ain’t so!

Is it time for this X-Man to be expelled from the franchise?

Marvel lovers can’t wait to see the X-Men make themselves known in the MCU, but it seems that the fan community is also praying that one of the team members won’t be part of their roster when they do eventually get here. After Fox bungled both X-Men: The Last Stand and Dark Phoenix, pretty much everyone is demanding that Marvel give the whole Dark Phoenix saga a rest next time around. Sorry, Jean, you had your time in the limelight ⏤ twice ⏤ and you blew it.

Head back here tomorrow for your next Marvel news roundup.