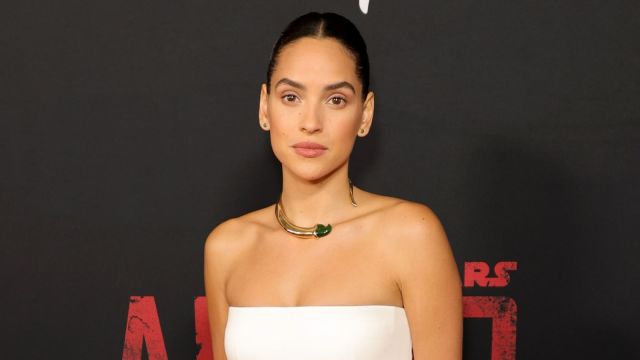 Star Wars fans should keep a careful eye on Disney Plus tomorrow. A leaked image last week indicated that something called “Grogu and Dust Bunnies” is set to debut on the service on the third anniversary of The Mandalorian‘s first season premiere. Possibly not uncoincidentally Studio Ghibli released an enigmatic teaser yesterday indicating they’re teaming up with Lucasfilm on a project. Could this be a Ghibli animated short featuring everyone’s favorite pint-size Force adept?

Update: this was indeed the case:

It’s been a good week for fans, with a new movie project, a barnstorming new episode of Andor, and a bunch of behind-the-scenes gossip. We’re rounding out the week with the return of a much-missed Solo: A Star Wars Story hero, an interview with Andor‘s Adria Arjona with some depressing news about the future of Bix Caleen, and Tony Gilroy’s opinions on Andor‘s viewing figures and release timing.

‘Hidden Empire’ will see Qi’ra facing off against Emperor Palpatine

That may be changing. Marvel is about to kick off a big Star Wars comic crossover called Hidden Empire, with Emilia Clarke’s character right at the core of it. Qi’ra has returned in previous comics, but a preview of the first four pages shows her boldly squaring off against Emperor Palpatine.

It looks like a case of game recognizing game, as he doesn’t instantly dismiss her threats and clearly recognizes her as a force to be reckoned with. The pages indicate a big clash between the Empire and the Crimson Dawn is on the cards, so if you’ve been curious about dipping into Marvel’s Star Wars universe now looks like a great time to jump in.

It remains to be seen whether Emilia Clarke will ever play Qi’ra again, though we’re still holding out hope the Crimson Dawn will make an appearance in a future show dealing with Star Wars‘ murky underworld.

The torture sequence in Andor‘s ninth episode was one of the most disturbing scenes we’ve ever seen in the franchise. Desperate to track down Cassian Andor for his links to the Aldhani heist, ISB lieutenant Dedra Meero captured his friend/former lover Bix and put her through a truly terrifying interrogation.

Rather than physical pain, Dedra subjected Bix to a psychic assault by playing her the screams of dying children from an alien world, which she ominously hinted would cause her permanent brain damage. That, sadly, seems to be true and Arjona has confirmed that the next time we see Bix she’s going to be very different.

Speaking with StarWars.com she opened up about the scene, saying:

“After she gets captured, she sort of becomes this prey. I think Tony made such an interesting choice. We’ve seen torture scenes so much in cinema for so many years. How do you do it different and what do you do different?”

She then confirmed that the torture will have had consequences:

“What I wanted to do — and I asked Tony — I really wanted her to turn into this child. You meet her as this woman that is so empowered and has everything under control, who takes care of Cassian. And then towards the end, she cannot [even] take care of herself.”

Andor hasn’t exactly been a fun ride, though this sounds truly depressing stuff.

Audiences seem to have finally recognized that Andor is worth watching. The first half of the season was apparently met with low audience figures and little discussion on social media. That may partly be some Star Wars fatigue setting in or a reaction to the disappointing Obi-Wan Kenobi, but it could also be down to some serious competition from other streaming shows.

Andor was originally meant to premiere on August 31, though slipped to September 21. This put its launch up against House of the Dragon and The Rings of Power, which gobbled up audiences’ time and attention. Gilroy has discussed this in an interview with The Hollywood Reporter, saying:

“Everybody’s pleased that [House of the Dragon] and [Rings of Power] are now out of the way, and I think a lot of people have been waiting for someone to tell them that it’s okay to watch [Andor] now or whatever.

It’s interesting because we changed our original date [from Aug. 31 to Sep. 21]. We were going to come out right with them, but it really wasn’t on our radar. I’m not sure that streaming dating has reached the level of military articulation that movie releasing has. It’s weird. I know that massive chess pieces of money are moving around the table on these shows, but a lot of people are doing things for the first time.”

But, thankfully, everything sounds very positive over at Lucasfilm:

“Everybody’s really [happy]. I’ve never had reviews or affirmation like this in my life, for anything. And the passion of the people who’ve been following along is just overwhelming, man. I don’t know what else to say. It’s humbling. So yeah, I think everybody’s happy with that.”

Season two of Andor is set to begin shooting on Nov. 21, meaning it’ll likely land on Disney Plus in mid-2024. We still have two episodes to go of the season, though it’s going to be a truly painful wait for the show’s eventual return. We’re just praying it doesn’t end on a cliffhanger.

One thing’s for sure, when The Mandalorian season three and Ahsoka air in early 2023 they’re going to have some very big shoes to fill.