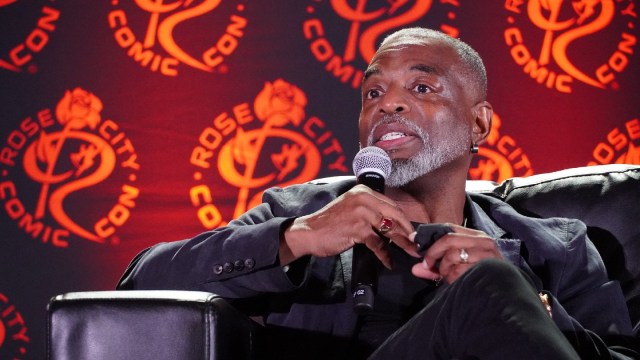 LaVar Burton is teasing his forthcoming return to the world of Star Trek after more than 20 years with his upcoming appearance in Picard, specifically hyping up a “five-episode arc” by writer Terry Matalas.

Burton made his remarks during a fan Q&A panel at Rose City Comic Con in Portland, Oregon, and We Got This Covered was there to document it. The actor and reading advocate was asked by a fan named Phoenix: “If you could just invent a new episode of Star Trek, regardless of any limitations […] what would it be?”

“I’m pretty certain it would be the upcoming five-episode arc on Picard season three,” Burton said in response, to the eruption of cheers amongst fans in the packed ballroom at the Oregon Convention Center. “Phoenix, this shit has got to be good,” he coyly added, making the crowd giggle. Burton went on to explain how much of a cathartic experience it was to reunite with many of his Star Trek: The Next Generation co-stars on set after so many years for the filming of the cameo-filled upcoming season of Picard.

“Seriously, it was so…satisfying doing it, actually having the opportunity to say goodbye while we knew we were saying goodbye. I never thought this would happen, and I think the rest of the cast felt the same way.”

Burton went on to recount a story in which Sir Patrick Stewart, who plays Captain Jean-Luc Picard, took many of his old castmates out to dinner—before production for Picard season one ever began—to break the news to them that “his intention was to do this character at another stage in his life.” While Stewart didn’t want anyone to feel left out, he also had to gently explain that “we weren’t invited,” Burton said. “Thank god he picked up the check because…otherwise he might not have gotten out of there alive.”

Though there’s been some intermittent cameos here and there in Picard so far, it’s mostly been a solo adventure focused on Jean-Luc and some new characters. All of that is going to change in season three when a veritable mini-reunion of The Next Generation cast members is lined up to help give the show its swan song. Burton sounded grateful for the call to return.

“To have had this opportunity to not only spend time together, like the old days, in our space suits, in 25 years since we had been together that way, right, relating to each other as these characters that we have all become so attached to. So, um, I didn’t have to dream it, Terry Matalas did, and I’m really thankful that he has.”

On the whole, Burton’s career is rather legendary. After his breakout role as Kunta Kinte in the 1977 TV miniseries, Roots, based on the Alex Haley novel of the same name, Burton cemented himself as a pop culture icon in the 1980s with his role as the nerdy engineer, Geordi La Forge, in Star Trek: The Next Generation. Beginning in that same decade, he was also the presenter and producer of the educational PBS show, Reading Rainbow, becoming a spokesperson for all things wholesome right alongside other icons in the genre, like Fred Rogers and Bob Ross. Incidentally, Burton cited both Haley and Rogers as some of his personal heroes during that same panel.

Burton is slated to reprise his role as Geordi in the upcoming third season of Star Trek: Picard, reuniting with his longtime co-star, Stewart. Burton’s appearance in the show, airing next year on Paramount Plus, will be the first time he has portrayed the character in live-action since 2002’s Star Trek: Nemesis.