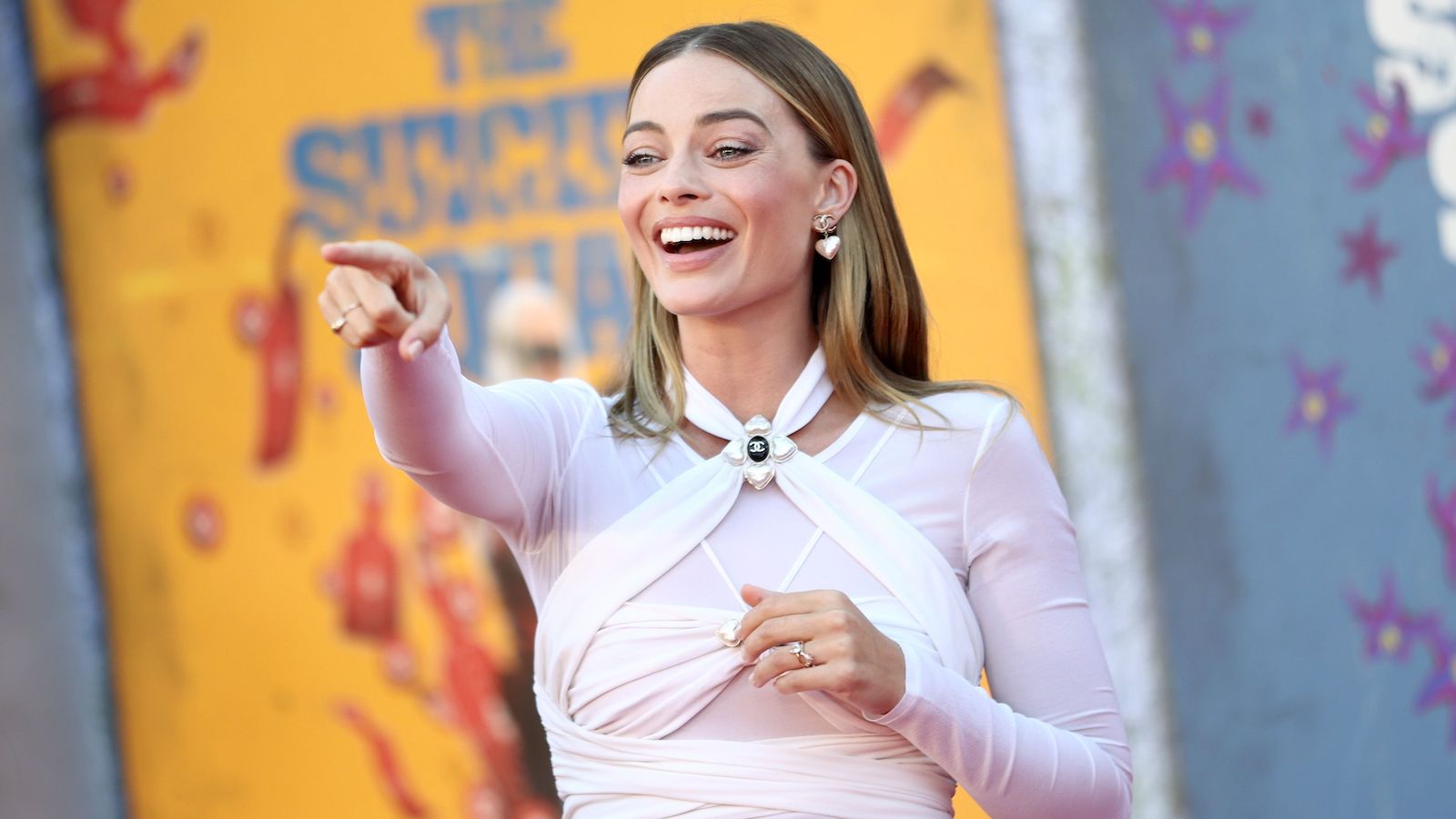 Australian actress and 31-year-old blonde bombshell Margot Robbie began her career portraying Donna Freedman on the television soap opera Neighbours. From 2011 to 2012, Robbie starred as Laura Cameron in the period drama series Pan Am. It was renowned filmmaker Martin Scorsese who gave Robbie her breakthrough feature-film role as Naomi Lapaglia — the Duchess of Bay Ridge — opposite Leonardo DiCaprio as stockbroker and con artist Jordan Belfort in The Wolf of Wall Street.

From then on, the esteemed Margot Robbie has made quite the household name for herself. However, despite the success and fame generated from The Wolf of Wall Street, Robbie has landed some roles in severely underrated films. IMDb, the online database for all things entertainment, has provided particularly poor ratings for some entries in Robbie’s filmography.

Some viewers were first introduced to Margot Robbie as Laura in Neighbours, others met her in full jester attire as Harley Quinn in James Gunn’s Suicide Squad. Regardless, Robbie has reached the pinnacle of her illustrious career, starring in many profitable features, but here are the most unfavorable of her feature films that we believe deserve much higher ratings.

In 2015, Glenn Ficarra partnered with John Requa and Warner Bros. Pictures to create the comedy-drama Focus. Starring the combined talent of Will Smith and Margot Robbie, Focus follows professional con artist Nicky who takes the femme fatale and inexperienced grifter Jess under his wing. Eventually, after picking a few pockets, Nicky and Jess develop romantic feelings for one another. Unfortunately, Focus received largely negative reviews and accusations that it skates by on its glamorous setting and charming stars rather than an enriching plot.

IMDb gave Focus a less than generous 6.8/10 that was generated by its users. Although the majority voted to give the Warner Bros. flick a more flattering 7/10, the averages evened out to produce a slightly lower score. For its clever, charming, and calculating concept, Focus deserves the compromise of a complaisant seven at the very least. Smith and Robbie have an electrifying chemistry that complements the unpredictable yet meticulously streamlined narrative.

Craig Gillespie’s I, Tonya chronicles the life of figure skater Tonya Harding and acts as a biographical and dramatized rendition of the 1994 attack on rival Nancy Kerrigan. Filmed with mockumentary-style interviews, I, Tonya stars Margot Robbie as Tonya Harding and Sebastian Stan as Harding’s ex-husband and co-conspirator Jeff Gillooly. Essentially, given the nature of the production, Gillespie and writer Steven Rogers allow audiences to decide for themselves whether to view the film as factual and realistic or a version of events concocted by Harding herself.

Most of the credit for I, Tonya’s success goes to Robbie and her co-star Allison Janney, who portrays Tonya’s mother LaVona Harding, due to their exemplary chemistry as an on-screen mother-daughter duo. I, Tonya finds the genuine humor in its story without losing sight of the tragic and emotionally resonant undertones that provide its glorified backbone. Gillespie’s black comedy earned a 7.5/10 on IMDb, but the average scores indicated a well-deserved eight, possibly even eight and a half. RogerEbert.com described I, Tonya as “an irresistible, soapy mix of jealousy, competition and class warfare, fortified by powerful performances and unexpected emotional resonance”, and such a comprehensive analysis couldn’t be more accurate.

Admittedly, Jay Roach’s Bombshell — despite only releasing three years ago — is one of Robbie’s lesser-known works. The film, starring Margot Robbie, Charlize Theron, and Nicole Kidman, recounts the stories of the women at Fox News who exposed and prosecuted CEO Roger Ailes for sexual harassment. Allison Janney, who had previously worked with Robbie on I, Tonya, returned in a supporting role along with Kate McKinnon, Connie Britton, John Lithgow, and Malcom McDowell.

Bombshell set its wheels in motion following the death of Ailes in 2017. Despite the film receiving favorable reviews, its box office revenues were seen as disappointing and it was considered a commercial failure. IMDb gave Bombshell a selfless 6.8/10, but like I, Tonya, it commands a worthy subject and does so with the utmost vigor, even if its partial inaccuracies take attention away from the ugly truth hidden beneath a sensationalistic surface. Bombshell is powerful, enthralling, and plays on its strongest assets, such as that of Robbie’s Kayla Pospisil and Theron’s Megyn Kelly. Somehow, Bombshell finds surreal comedy in its daunting realism and manages to remain hilarious and compelling. Its rating should far exceed seven out of ten, if not gravitate more toward eight.

Josie Rourke — in her feature directorial debut — delivered Mary Queen of Scots, a timeless historical drama based on John Guy’s 2004 biography Queen of Scots: The True Life of Mary Stuart that chronicles the lives of Mary, Queen of Scots (Saoirse Ronan) and Queen Elizabeth I (Margot Robbie). The film includes Jack Lowden, Joe Alwyn, David Tennant, and Robbie’s Neighbours co-star Guy Pearce in supporting roles. Sadly, Mary Queen of Scots‘ IMDb rating of 6.3/10 fails to do justice to the talent of its unmatched leads in Ronan and Robbie as well as the educational and emotionally potent storyline.

Mary Queen of Scots received abundant criticism for its supposed historical inaccuracies, including the on-screen portrayal of Mary and Elizabeth’s rivalry, which was portrayed to be more akin to a distant friendship. Additionally, factual sources claim that Mary and Elizabeth communicated solely via letters and never met, whereas they do in Rourke’s rendition. Despite its flaws, Mary Queen of Scots is easily the most undervalued of all Robbie’s films, warranting a glowing report of at least seven out of ten.

Another dark horse in Robbie’s filmography, the neo-noir thriller Terminal was directed by Vaughn Stein and stars Robbie as Annie and Bonnie, identical twins and contract killers who—while posing as everyday women—encounter a terminally ill teacher (Simon Pegg) and discover their lives to be inexplicably intertwined in the murderous masterplan of a criminal mastermind. Despite mostly negative reviews, Robbie’s dual-role performance in particular earned the utmost praise as she sincerely outshines her co-stars. Unfortunately, Stein’s Terminal lacks substance and works with a stodgy script that lacks the imaginative know-how to propel an alluring concept ripe with daring possibilities.

Regardless, Terminal has plenty of strengths that outnumber its weaknesses and Shaun of the Dead star Simon Pegg meets Margot Robbie half way with a perfectly toxic dynamic that drives the plot forward and allows for the so-so storytelling to be overlooked. Max Irons and Mike Myers never disappoint, so even if Terminal suffers a few missteps, there is never a dull moment to be had. Its IMDb score reflects only on its less appealing qualities, not the audacity it takes to stand out from the crowd. At least six — if not seven — out of ten is far more reasonable.

But don’t take our word for it, revisit these films and see for yourself. Robbie’s performance alone in any one of these is enough to bring the rating up in our book.