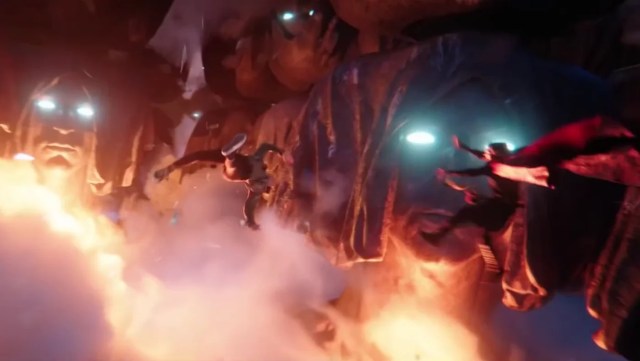 For the gazillionth time, Marvel fans have tried to determine the most powerful character in the MCU, but now there are some pretty convincing answers.

Redditor apolloOP-_- got the ball rolling, which has inflated into nearly 12,000 upvotes and over 3,300 comments, the best of which is a shortlist containing Arishem the Judge, Gauntlet-wielding Thanos, Eternity, Scarlet Witch, He Who Remains, and a post-dated selection of Galactus for if/when he appears in the MCU.

Judging by the 3,000-plus upvotes, many fans agree with that shortlist, although yudisingh2004 rightly noted that “Eternity lost to Thanos with the Infinity gauntlet,” putting that cosmic entity (who actually created the Infinity Stones!) lower on the list.

Moreover, Chrispy_Kelloggs noticed an egregious omission: Living Tribunal, the judgemental cosmic entity whose statue has graced several MCU projects. “That’s true did not think of it,” replied shortlist author Nickazur. “We know somewhere outside there is the Living Tribunal as a statue confirmed it. So if it is similar to comic books, ye he [sic] is probably the strongest!”

As the Redditor said, if the Living Tribunal proves to be as strong as it is in the comics, it might be the answer for the “most powerful character in the MCU.”

Of course, fans also gave tongue-in-cheek answers, one of which may affect your tear ducts.

The Living Tribunal may be the most powerful character in the MCU, but it wouldn’t exist without Stan Lee. R.I.P. the One Above All.