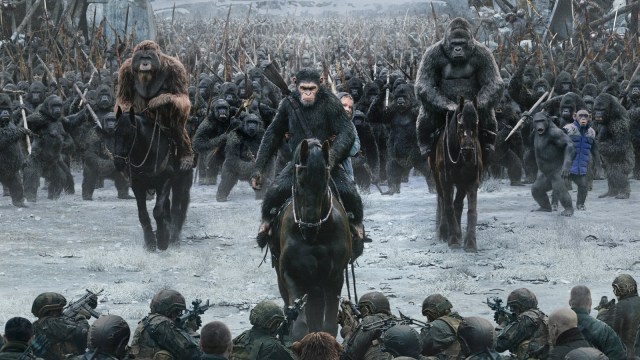 Following up one of the most acclaimed trilogies of the modern era is no easy task, especially when Rupert Wyatt and Matt Reeves combined to tell a fully story with a definitive conclusion across the acclaimed Planet of the Apes movies Rise, Dawn, and War.

Of course, the fact that the trio combined to earn billions at the box office meant that a continuation, refresh, or reboot was never off the table, with The Maze Runner director Wes Ball having been developing a fourth installment for a while now. After much speculation, the title has officially been unveiled, and Kingdom of the Planet of the Apes definitely has a nice ring to it.

Based on the moniker alone, we can assume that our simian overlords have officially ascended to the top of the food chain, and the first promotional image has also arrived to get us an indication of what to expect on an aesthetic level, which you can check out below.

Not only that, but a full cast list has been announced, too, with The Witcher alum Freya Allan set to star alongside Owen Teague, who was recently confirmed to be stepping into the daunting shoes of Andy Serkis as the lead ape. Of course, we don’t really need to see the story continued after three consecutive critical and commercial smash hits, but we’ll give Kingdom the benefit of the doubt for now, even if Ball faces a hell of a job to live up to the expectations placed on picking up the mantle.