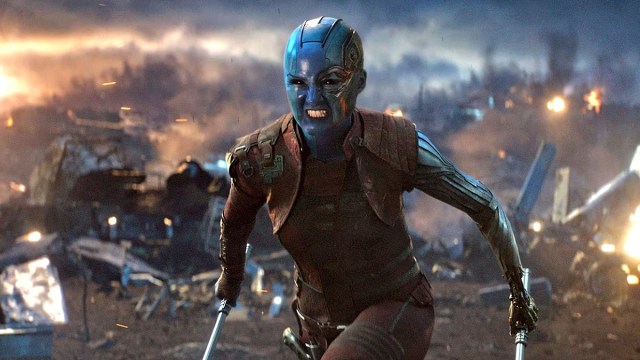 Utilizing a long-form storytelling model not dissimilar to that of episodic television has been used as a criticism of the Marvel Cinematic Universe plenty of times in the past, but it’s also been a huge positive. Spending years getting to know supporting characters helps create an emotional investment and audience connection that wouldn’t work otherwise, and few background players have benefited more from that sentiment than Karen Gillan’s Nebula.

The blue-skinned daughter of Thanos has never been regarded as one of the franchise’s leading lights despite her immense popularity, even though the actress has become part of the furniture after making appearances in all three Guardians of the Galaxy movies, the upcoming Holiday Special, Avengers: Infinity War and Endgame, Thor: Love and Thunder, as well as a scene-stealing sultry turn in animated series What If…?

Throughout Nebula’s eight years in the MCU, she’s evolved from merciless killing machine to sympathetic figure, giving her arguably one of the finest redemption arcs in modern blockbuster cinema after she cast aside her association with the manipulative Thanos to sign up with the Guardians instead. It’s been one hell of a ride, and fans have been widely praising both the journey and Gillan’s performance on Reddit.

As two of the top-voted comments point out, Nebula was taken from her home as a child to be experiment on, grew up insanely jealous of a sister that their father clearly favored, was detested by them both at various points, and finally connects with Gamora… who then dies. To top it all off, she has to kill a version of herself from the past in order to come to terms with who she is now, which is seriously heavy stuff for a family-friendly saga.

The Guardians may be bowing out in their current form after Vol. 3, but let’s hope Nebula hangs around for a long time to come.