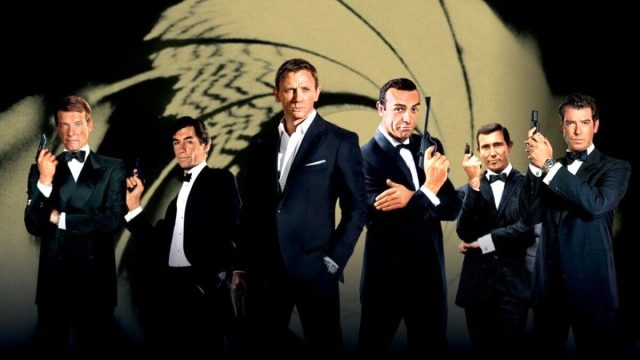 Each actor who has donned a tuxedo to play British superspy James Bond over the 60-year big screen history of the character earned the right to wear it thanks to at the very least, some decent acting chops. Well, almost all of them when you consider that George Lazenby had no acting experience prior to replacing Sean Connery in 1969’s On Her Majesty’s Secret Service. And in full disclosure, Lazenby hasn’t really done much after his only 007 film; he has a handful of movies on his resume, but nothing a mass amount of people have ever heard of.

As for the rest of the men who have also played 007 in their respective films, they have done some standout work in other productions over the years that you might’ve heard of.

Sean Connery in The Untouchables

This Brian DePalma-directed film from 1987 co-starred Sean Connery as Officer Jim Malone, an Irish-American Chicago patrolman. Malone is hand-picked by legendary “Untouchable” Eliot Ness (played by Kevin Costner) to help in his efforts to take down mafia crime boss Al Capone. Connery certainly looks nothing like the suave spy that he’s always been most known for playing on-screen, instead, he’s a tough veteran beat cop that quickly instills a no-nonsense attitude that’s vital to bringing a dogfight to one of the most notorious criminals in U.S. history. Malone’s the heart and soul of the four Untouchables once they’ve banded together, and the performance by Connery in the role was one that’s stood the test of time for decades. For his efforts, Connery won the Best Supporting Oscar in 1988.

Daniel Craig in Knives Out

One of the best whodunits in recent years is 2019’s Knives Out. Daniel Craig starred as Benoit Blanc, a clever, well-dressed private detective who’s been called to solve the suspicious death of a wealthy patriarch. The film features an impressive ensemble cast, nearly all of them playing characters considered plausible suspects. The plot plays out extremely well, leaving viewers mostly unsure who the villain of the story is. Craig’s portrayal of the stylish investigator in the middle of it all resulted in rave reviews among the masses. The response was so successful, in fact, that Craig signed a deal to reprise his role in a two-sequel deal worth $100 million. The next mystery movie in the Knives Out series is entitled Glass Onion: A Knives Out Mystery, set to premiere in November 2022.

During his tenure as Bond, Pierce Brosnan starred in 1999’s The Thomas Crown Affair. This film was actually a remake of the stylish 1968 caper that starred Hollywood legends Steve McQueen and Faye Dunaway. In this one, Brosnan co-starred with actress Rene Russo. Although this movie didn’t feature several locales as a Bond film would, it was still set mainly in the widely diverse location that is New York City. The plot still followed a dashing leading man through his own adrenaline-charged exploits in the aftermath of a cleverly-orchestrated art heist undertaken by a billionaire gone bored.

Adding to the appeal was Brosnan not having to change much of his natural charm and sophistication from playing 007 at that time. This is one of Brosnan’s best performances in his ongoing career so far, and this film keeps you guessing, even though the viewer knows what Crown has done very early on — it’s just that no one, including Russo’s character, knows how he’s done what he’s done. Not every film like this one can display such a perspective as well as this one. And apart from the difference in clothing labels from the costume department, so much of it looked a lot like a Bond film that without key plot points and characters, you could possibly mistake this one as a casual mission handed down from MI6.

Roger Moore in The Cannonball Run

Released in the same year that Moore played Bond in For Your Eyes Only — 1981, to be exact — he also played quite a similar character in the high-speed comedy, The Cannonball Run. The plot of this movie features a bunch of outlaw drivers, racing their own respective vehicles in a zany cross-country chase for bragging rights and a load of loot waiting for the winner. Moore played a fictional character who, believe it or not, believed he was really Roger Moore, that’s right, the James Bond actor who was also acting in this movie. Sort of an odd fourth wall concept, perhaps? When you consider the tone of this movie though, this gimmick fits perfectly. And Moore’s character here wasn’t too far off being 007 either, to be honest. He wore nice suits and even drove a classic silver Aston Martin DB5, the same car that’s been featured throughout the 60-year cinema history of Bond.

Sean Connery in Indiana Jones and The Last Crusade

In 1989, Connery put forth one of the best performances of his post-Bond career as he co-starred in the second action-adventure sequel of the Indiana Jones series. He was cast as Henry Jones Sr., the wise and equally resourceful father to Indiana Jones. Connery’s performance as Indy’s father nearly steals the focus from the titular hero, as he and “Junior” race to get their hands on the Holy Grail before the Nazis do. The chemistry between Connery and co-star Harrison Ford is the pure life force behind this action epic, scene after scene. In fact, their performances were so admired over the years that fans of the franchise thought it was automatic for both actors to reunite once the fourth film in 2008 went into production. However, Connery retired from acting in 2006, leaving him unavailable to reprise his role.

The satirical buddy cop movie Hot Fuzz featured Dalton in a supporting role as Simon Skinner, a sort of sleazy, yet satisfying supermarket proprietor in a suspiciously quiet English town. This pick from 2007 was directed by Edgar Wright and co-starred none other than Simon Pegg and Nick Frost, of Shaun of the Dead and The World’s End fame. The overall film pokes great fun at countless action movies but without giving too much of it away, Dalton plays up his character quite well throughout all of his screen time. Nearly every time you see him, it’s not known if he can be trusted, which adds to the enjoyment of this movie playing out all the way to the end credits.

Sean Connery in The Rock

The man himself wasn’t done yet with acting, when he was cast in an action movie alongside Nicolas Cage in 1996’s The Rock. One of the best action movies of the nineties featured a U.S. chemical weapons expert (played by Cage) partnered up with a formerly imprisoned MI6 agent who isn’t named James Bond, but instead named James Mason. However, some fan theories over the years have argued that Connery’s character here just might be 007 himself, based on striking similarities between both characters.

These men are tasked with leading a strike team to infiltrate the most notorious prison in America, the since-closed Alcatraz Federal Prison, off the coast of San Francisco, California. They must stop traitorous military veterans, armed with deadly gas weapons, from harming their hostages and unleashing the weapons on vulnerable American targets. The movie’s a thrilling adrenaline rush from start to finish, playing out as only a Jerry Bruckheimer/Don Simpson production would, seeing as they were the film’s producers, of course.

In probably his best-known role before he donned 007’s tux, Brosnan played a supporting role, alongside the legendary Robin Williams and Sally Field, in 1993’s Mrs. Doubtfire. In addition to the accolades and admiration for the entire film, audiences might also have vivid memories of Brosnan’s portrayal of Stuart “Stu” Dunmeyer, or at least the “drive-by fruiting” he suffers halfway through the movie. Dunmeyer’s a rich and handsome bachelor who proves to be an adversary to Williams’ single dad dilemma that plays out through the course of the film. Brosnan gives a great performance and consistently looks good on the screen, which helped at least American audiences accept him when his era as Bond began only two years later.

This British gangster film from 2004 stars Craig as an unnamed cocaine distributor who nearly loses not only his livelihood but also his life during one last drug deal before he gets out of the business for good. Directed by acclaimed British director Matthew Vaughn, of Kick-Ass and Kingsman fame, this was definitely a stylish, humorous, and entertaining movie from start to finish. It’s so full of intrigue that the audience easily comes to appreciate these otherwise bad guys, even with the 210 f-bombs peppered in there. But genuinely speaking, Craig’s “antagonist” uses his wit, charm, and business savvy – sometimes in a well-tailored suit, to make it to the end. In some scenes, the viewer will be able to see some precursors to his tenure as Bond, two years before the mega-successful Casino Royale.

At a time when the idea of Timothy Dalton playing James Bond was an on-again, off-again sort of concept, he had a supporting role in the 1980 sci-fi comic book cult film, Flash Gordon. In the movie, Dalton was cast as Prince Barin, a valuable ally to the titular hero against the evil Emperor Ming. Sure, this movie was based on a vintage comic book series but instead of it playing like an epic Marvel movie, it went the style of a campy and humorous adventure. After its initial release back then, it wasn’t received very well by the masses. However, it’s certainly earned a remarkable cult following, and Dalton’s effort as a co-star had much to do with its rise in popularity over all this time.