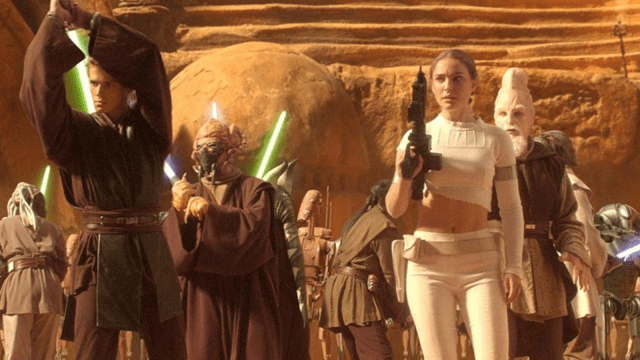 Image via LUCASFILM
Review of:

Star Wars: Episode II – Attack of the Clones was released 20 years ago, but fans are buzzing about it now in a whole new way. Even Ewan McGregor might agree with the conversation, as one Reddit user posed the original question about the title.

Old CNN footage shows a young McGregor standing beside Nicole Kidman at a red carpet event when he found out the name of the movie for the first time from a reporter. His reaction is priceless!

“Is that better than Phantom Menace? I don’t know,” he says after laughing hysterically. This is what the conversation is all about, and it’s getting aggressively more hilarious.

When the original poster asked the question on what could have made for a better title than Attack of the Clones, fans came out of the woodwork to answer. It’s as if they’ve been waiting 20 years for someone to simply ask, and the list was ready. Quite frankly, someone should have posed the query much sooner.

When naming a sequel, it’s easy just to go with “2” or “II.” If George Lucas would have opted for that, it would have been easy – but it wouldn’t have been epic. One Reddit user found an fitting way of naming this sequel.

That would have been a winner for real if anyone was taking this conversation seriously. However, many fans are not, and they’re just having fun with titles because after all, there’s nothing anyone can really do it about it now. Like this nod to Obi-Wan’s friend on Coruscant.

Of course, fodder for humor is always a play on words. If there’s any way to twist the title, especially in the lamest way possible, it’s good for a laugh.

Then, one suggestion comes along that outshines them all. As true fans of Star Wars are already aware, Jango Fett loses his head in a tangle with Mace Windu. Obviously, this one wins!

There were so many suggestions, it appears the fans of Star Wars would have done a much better job at naming the movie than the makers did. Ewan McGregor knew that right off the bat, so why didn’t anyone else see it?