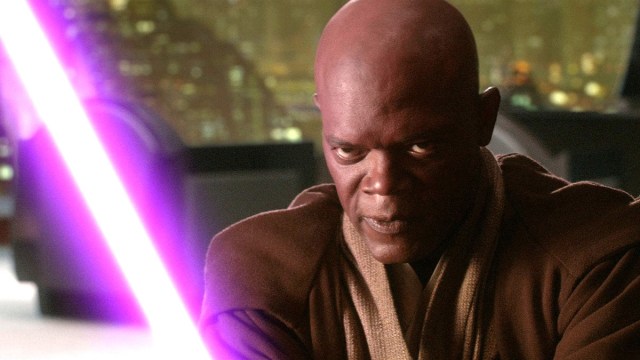 Many Star Wars fans think that Jedi Master Mace Windu should be allowed to rest in peace.

AmeliaWysocki asked the r/StarWars subreddit if it was possible that Master Windu (Samuel L. Jackson) survived his infamous duel with Sheev Palpatine (Ian McDiarmid), during which Anakin Skywalker (Hayden Christensen) failed the ultimate loyalty test by intervening on behalf of the usurper instead of coming to Windu’s aid.

The collapse of Anakin’s integrity saw him enable Palpatine to kill his friend and mentor Windu. It was the moment that Anakin completely surrendered himself to the Dark Side in exchange for personal power. For this reason, it seems that many Star Wars fans would rather not see Windu wield the purple blade of his light saber again.

Rough_Jawn argued in favor of an end to the apparent creative inertia that keeps revisiting the resurrection trope instead of exploring fresh ideas and developing new characters for storylines.

While fans seem fond of Windu and respect his importance in the Star Wars universe, there is a general desire to see the story move on from chronicling the history of the Skywalker family. Redditor TheHighGround99 explained that they would prefer to see the franchise delve into unchartered territory.

Another fan was not against the idea of Windu surviving the electrifying mortal blow from Palpatine and suggested that his character might be restored in a malevolent incarnation.

Though Hayden Christensen implied that Windu could have survived his duel with Palpatine and Anakin’s treachery, most fans agree that Windu’s appearances in Episode I – The Phantom Menace (1999),  Episode II – Attack of the Clones (2002), and Episode III – Revenge of the Sith (2005) is sufficient. Windu’s betrayal and tragic death illustrate the totality of Palpatine’s psychological seduction of Anakin Skywalker.

The Star Wars films and television series are currently streaming on Disney Plus.