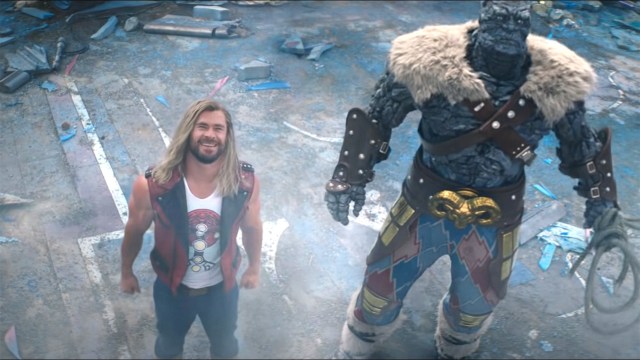 Taika Waititi was willing to spare no expense to get amazing songs for Thor: Love and Thunder. Judging by the trailer and pre-release reactions, he accomplished that goal.

From the instant we discerned Guns N’ Roses’ “Sweet Child O’ Mine” in the background of Love and Thunder‘s first trailer, we knew music was going to play a big role in the film, which was confirmed by Waititi in an interview with Vital Thrills.

“We just wanted to spend as much money as we possibly could on some songs. It’s always been a dream of mine. The whole aesthetic around the film was always we wanted it to be this bombastic, loud, colorful palette, which kind of reflected, like, spray painted panel vans in the ’80s and rock album covers.”

Unsurprisingly, Waititi spoke about hard rock influences like Metallica and Guns N’ Roses during the MCU blockbuster’s press conference, which are held close to the writer and director’s heart.

“Even the title treatment, you know, for the film, it’s the kind of thing I would’ve drawn on my school book in class when I wasn’t listening. I remember spending months and months perfecting the Metallica logo at school. So yeah, and just to tap into all that stuff and Guns N’ Roses, was like one of my all-time favorite bands. To be able to use that stuff to reflect the sort of crazy adventure that we’re presenting visually was another one of my dreams that came true.”

The cost to license a popular song for a movie is not light. Varsity Blues paid $500,000 to use AC/DC’s “Thunderstruck” for a single scene. Guns N’ Roses licensing fees are likely of similar heft, although lead singer Axl Rose once gave “Sweet Child O’ Mine” to the The Wrestler for free.

We doubt Rose was that generous for Thor: Love and Thunder, but thankfully Waititi was, or we wouldn’t have the Thor/GN’R crossover that we didn’t know we needed.