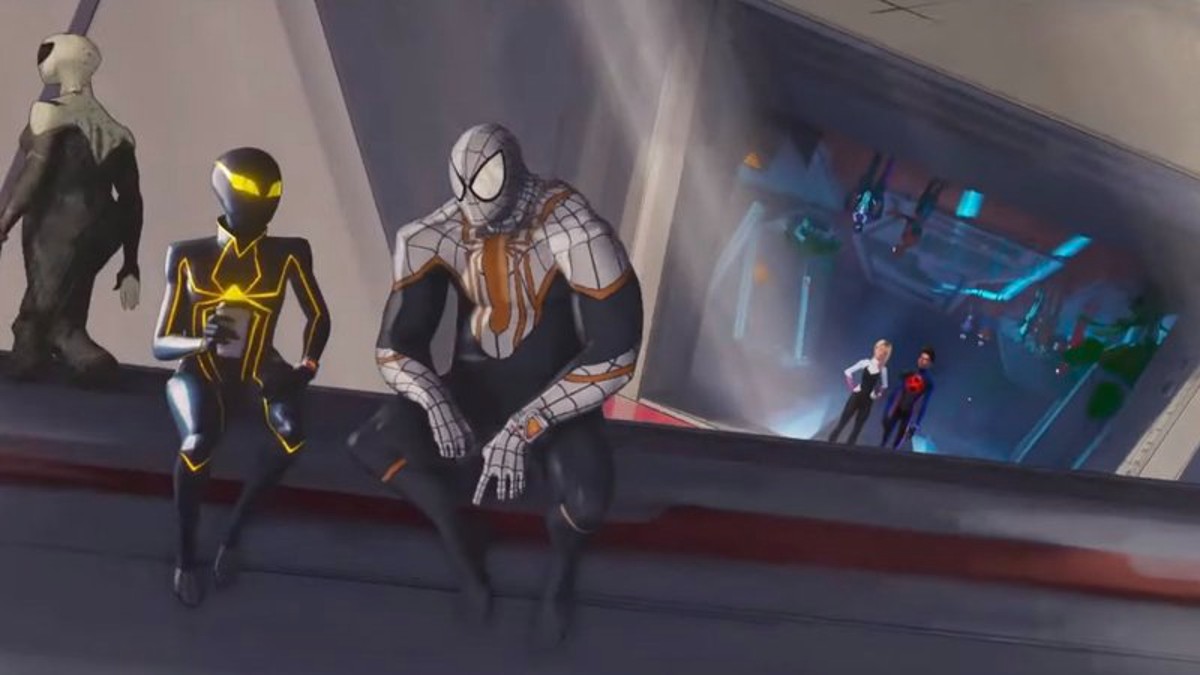 Spider-Man: Across the Spider-Verse will have an extensive number of multiverse characters that’ll join Spider-Man and his trusted allies, and they each have fascinating stories of their own.

In this sequel to the highly regarded Spider-Man: Into the Spider-Verse, Miles (Shameik Moore) and Gwen Stacy/Spider-Gwen (Hailee Steinfeld) travel through the Multiverse and encounter a legion of Spider-Man variants. The movie will feature six different universes with their own art styles, much like the first film, and Miles will face off against greater threats than he’s ever faced. In the Across the Spider-Verse trailer, Spider-Gwen returns via a portal and invites him on another adventure. He’s soon hurled through hexagonal traveling tubes and attacked by the domineering Spider-Man 2099, voiced by Oscar Isaac. Spider-Man ends up at the Spider-Verse Nexus, a space filled with Spider-People from various alternate universes, and that’s not even all of the ones who will appear in the movie.

Daniel Kaluuya will voice the punk rock Spider-Man and he’s one of the most anticipated Spider-Men in the movie. Spider-Punk first appeared in The Amazing Spider-Man #10 by writer Dan Slott and artist Olivier Coipel. Hobart Brown is from Earth-138 and rebels against the authority while rocking out with his spider-themed guitar. Hobi was also bitten by a radioactive spider, only this one was irradiated by illegal waste dumping, which gives it even more of an overt political spin. He becomes a Spider-Totem and fights against the establishment, bringing with him his band of heroes, Karl Morningdew/Captain Anarchy and Robbie Banner/Hulk. Kaluuya is a great choice to pull off this radical Spider-Man.

Benjamin Reilly made his first appearance as Scarlet Spider in The Amazing Spider-Man #149 by Gerry Conway and Ross Andru. He’s a clone of Peter with all the same powers, who was created by Peter’s biology teacher Miles Warren, known as the supervillain the Jackal, specifically to combat the web-slinger. During a confrontation at Shea Stadium with the Jackal and his clones against Spider-Man, a bomb goes off and the Spider-Clone is seemingly killed off. Characters with this much potential don’t stay off the pages for very long, and after five years of self-imposed exile, the Scarlet Spider returns and was used by Norman Osborn to pose as the real Peter Parker.

Mary Jane Watson of Earth-18119 is a superhero known as the Spinneret in The Amazing Spider-Man: Renew Your Vows #1 by Dan Slott and Andy Kubert, and in this universe, she’s married to Peter and they have a daughter named Annie Parker. In this story, heroes are dying or disappearing and the Avengers believe that the CEO of Empire Unlimited, Augustus Roman, is the man behind it. Spider-Man soon discovers that Augustus is using the powers of the fallen heroes to become Regent, and the Spider-Family has to work together to stop him.

Spider-Cop made his first appearance in Spider-Geddon issue #4 by Christos Gage and Jorge Molina. Spider-Geddon was a limited series that involved alternate versions of Spider-Man coming together. Superior Octopus creates clones of himself using the technology of the Inheritors that gives him the ability to send his consciousness into them in the event that he dies. Spider-Gwen was recruited to join the Spider-Army to stop the Inheritors, but it came at a significant cost. Not much is known about the full extent of Spider-Cop’s powers, but it’s safe to assume they mirror Peter’s. In the Across the Spider-Verse trailer, he’s seen directing traffic in the Nexus so he does possess that skill.

Peter Parker from Earth-2301 is the Mangaverse Spider-Man that puts a twist on the classic origin story. His first appearance was in Marvel Mangaverse: Spider-Man (2002) #1, and in this version, Peter was a part of the Spider Clan, a group of highly trained ninjas taught by the masterful Sensei and uncle, Ben Parker. Ben was killed in this universe too, only this was done by Venom at the behest of the Kingpin and Kuji Kuri, which inspired the young man to one day make those who were responsible pay for what they’d done. Mangaverse Spider-Man’s powers are like that of the main Spider-Man, only he can produce his own organic webs.

The Spider-Man Unlimited animated series was a short-lived series only lasting 13 episodes, but it still made a lasting impact. In this story, J. Jonah Jameson’s son John Jameson goes on a mission through space to the Counter-Earth, only Venom and Carnage disrupt the plans. Spider-Man is blamed for the loss of contact and he has to set things right. Peter gets a brand new suit and goes to Counter-Earth himself where he encounters hybrid humans and dangerous bestials that consist of versions of Spider-Man’s villains that he has to defeat, on top of having to deal with Venom and Carnage. It’s nice seeing this version of Spider-Man get some much-needed love.

The Insomniac Games’ version of Spider-Man from the 2018 video game was briefly seen in the Across the Spider-Verse trailer, but it was still sweet to see him. He’s identified by his signature suit with its white spider emblem, only there are slight differences made to his costume. The only noticeable difference is that there are red patches on his legs, which could be a hint that this addition could be included in Marvel’s Spider-Man 2. Similar to Into the Spider-Verse, Marvel’s Spider-Man uses a whole lot of characters and covers much of Spider-Man’s history.

The story in the first game shows Parker’s progression into a highly-skilled superhero with the usual cast of characters around; Mary Jane, Aunt May, and the supervillain Otto Octavius/Doctor Octopus are all present and accounted for. Peter even encounters Miles Morales, who’s a tertiary playable character in the game and Insomniac’s expansion Marvel’s Spider-Man: Miles Morales. It’s unclear whether this story will tie into the upcoming game or if this is just a fun Easter egg. Either way, this cameo was one of the absolute best we’ve seen.

Spider-Man India from Earth-50101 made a cameo and his new look might actually be better than his original appearance. Pavitr Prabhakar first appeared in Spider-Man: India #1 by Jeevan Kang, Sharad Devarajan, and Suresh Seetharaman After his parents died, Pavitr moved from his Indian village to Mumbai to live with his Aunt Maya and Uncle Bhim. Like Peter, he wasn’t exactly popular and he was bullied at school for his upbringing and being a nerd, but his friendship with Meera Jain makes life a little easier. His villain is the crime lord known as Nalin Oberoi who’s in possession of an ancient amulet that turns him into a demon and can open a demon gate. In terms of design, Spider-Man India has to be one of the best-looking Spider-Men so far.

Spider-Man 2099 is seen fighting Miles Morales in the Across the Universe trailer, and he poses a domineering figure against the smaller Spider-Man. He’s from Earth-928 and his first appearance was in The Amazing Spider-Man #365 by Peter David Rick Leonardi and he represented the end of the Heroic Age. As a young boy, Miguel O’Hara was bright and full of potential, but when he became a student at Alchemax and was injected with the addictive drug Rapture, his hateful program supervisor Aaron Delgado took advantage of Miguel’s condition. Aaron manipulated the equipment Miguel used to cleanse his body of the drug, but this accidentally gives him his spider powers. His powers aren’t radioactive-based, but he has many of the same abilities as the original Spider-Man. He also has telepathy, retractable talons, and fangs, and he can move so fast that it leaves behind a decoy of himself.

Issa Rae will voice Jessica Drew/Spider-Woman in Across the Spider-Verse, and in the trailer, she bursts onto the scene and takes out villains using her motorcycle and her spider abilities, all while pregnant. Jessica made her first appearance in Marvel Spotlight #32 by Archie Goodwin and Gil Kane, and Stan Lee confirmed she was created for the purpose of owning the trademark before another company could scoop up the name. Spider-Woman had the longevity to survive and has lived quite a life. Jessica got her powers when her mother, who was pregnant with Jessica, got hit with a radioactive blast that contained various spider DNA. She’s been experimented on, brainwashed, turned into a Hydra agent, became an Avenger, private detective, and had a child. Jessica’s got a lot going on, but she’s a captivating character with impressive staying power.