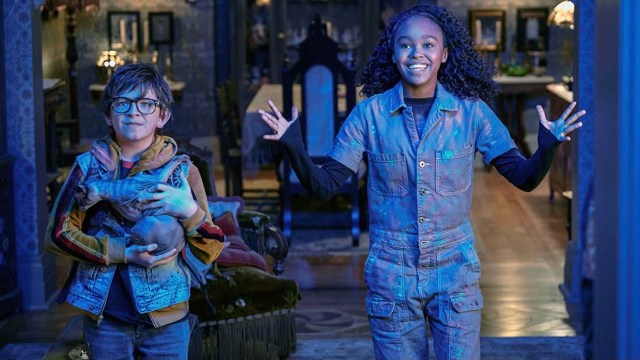 The month of October is just around the corner, and that means it’s almost time: trick or treating, fun costumes, pumpkin carving, and most importantly… spooky Halloween movies. While scary movies have always been a mainstay in cinema over the decades, things undoubtedly get a little bit more interesting during the month. However, that doesn’t mean the little ones should be left out of all the haunted magic in the air.

Streaming giant Netflix provides a ton of fun and exciting films to watch with the entire family, while remaining rest assured that things don’t get too scary. There’s a variety of offerings as well, from animated stories, to fantasy films, and even anime!

So while you’re making a list of candies to buy, and hanging skeleton decorations, here are some of the family-friendly kids Halloween movies on Netflix to get you all the more prepared for the hair-raising return of spooky season.

Kicking you off with a more recent offering to the spooky genre, Nightbooks was released in September 2021 and is based on J. A. White’s book of the same name. Krysten Ritter stars as a witch named Natacha, who has two children trapped in her haunted house. The only way to stay alive? Tell a scary story every night! Nightbooks is a fun and fast-paced flick that’s sure to get many youngsters interested in the horror genre.

A Babysitter’s Guide to Monster Hunting (2020)

A great introduction to the world of monsters, A Babysitter’s Guide to Monster Hunting was released in 2020 and focuses on a high school girl who must join a society of babysitters to locate a boy who was taken by the Boogeyman. There’s some fun celebrity appearances in this kids movie that even the adults can enjoy, and it teaches kids the value of friendships and fearlessness.

A series of tales brought to you by fan-favorites Shrek, Donkey, Ginormica, B.O.B, and more from the animation studio, Spooky Stories is sure to evoke feelings of nostalgia from older viewers, while the kids can enjoy some fun, haunting, and hilarious shorts.

Superstar Becky G stars as Chloe in this animated film. When she moves into a new house with her mother, she teams up with the garden gnomes to defeat the monsters that threaten her new life, and the world at large. Olivia Holt, Josh Peck, and George Lopez co-star in this family-friendly adventure.

A critical and commercial hit, this spooky animated classic packs a ton of big names into its cast, but the kids won’t really care about that. They’ll enjoy the beautiful animation, hilarious jokes, and fun plot, while rooting for the awesome characters along the way. When some youngsters face their fears and confront their neighbor’s monster-houses, a thrilling adventure ensues.

When she moves into her grandmother’s house, a girl becomes acquainted with some ghosts who help her power through the loss of her parents, and find some of the joys life has to offer. While a beautifully drawn anime, Okko’s Inn touches on grief and loss, making it an educative watch for the little ones, and a more mature offering for any older viewers.

Best friends Gabi and Spence are sure that ghosts exist, even though they’ve never seen one. However, when news of a haunted house surfaces, the pair embark on an exciting journey with their dog. Sure enough, they have their first paranormal experience.

Adam Sandler enlisted a wealth of talents for this ensemble-led spooky comedy. Hubie Halloween follows Sandler as the titular character who must protect the residents of Salem, Massachusetts from a sinister villain. While younger kids will need some parental guidance when watching, pre-teens should have a fun time keeping up with Sandler’s kooky horror flick.

This Nickelodeon Halloween story stars Victoria Justice and Brooke Shields in a spooky comedy story. When 17-year-old Jordan and her family move to Romania, an unfortunate accident turns her into a werewolf. Her monster-loving brother Hunter witnesses her transformation and must find a way to bring an end to the curse… and that could mean killing his sister.

While it sounds like a spooky horror unfit for kids, The Boy Who Cried Werewolf is actually one of the mildest Halloween stories out there, and is a great film for young kids to enjoy.

Melvin’s attempt to cancel Halloween is thwarted by George and Harold, who enlist Captain Underpants to revive the scary holiday and enjoy all the magical and spooky moments that come with it.

The famous preschoolers come together to make Halloween the most memorable one and put a smile on their neighbors’ faces. Super Monsters is the perfect Halloween accompaniment for toddlers and younger children, and will definitely get them in the holiday spirit.

A hilarious comedy with some important moral lessons embedded into the story, Liar, Liar, Vampire is a movie that follows the life of a new transfer student, Davis Pell, who really wants to fit in with the cool kids. Things take a favorable turn for the teenager when the most popular girl in school mistakes him for a vampire, making him instantly popular. He enlists the help of his new neighbor, Vi, to help him maintain his new status. While the film offers some laughs, it teaches kids and teenagers the value of loving oneself, making good friends, and not succumbing to peer pressure.

Another fun adventure for the little ones, this adorable animated story follows the brave StarBeam and her friends, who come together to save the holidays and stop the dastardly Captain Fishbeard from stealing all the candy in the town.