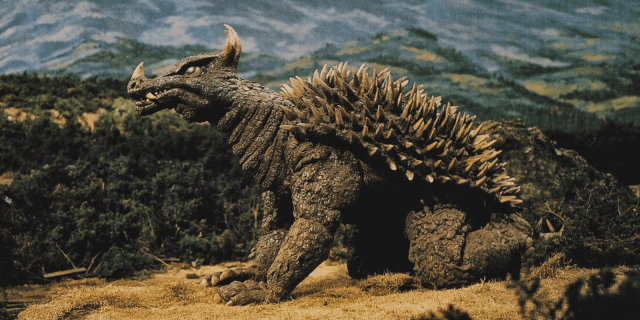 Image via Toho
Review of:

With Gamera: Rebirth set to reignite the long-standing competition between the eponymous fire-breathing turtle and the arguably untouchable kaiju king, Godzilla, one can’t help but take a step back and admire the longevity and charm of the kaiju genre, which centers on the plights of and against one or more gargantuan monsters.

Godzilla’s been waging an on-and-off war against humanity since the 1950s, King Kong has had an infinitely more antagonistic relationship with us for even longer, and Gamera turned Godzilla’s Japanese kaiju monopoly on its head back in 1965. Now, with the Godzilla/Kong franchise finding more than enough footing with modern audiences and Gamera set to make his return sooner rather than later, it begs the question of what other famous kaiju could put an end to life on the shelf and join these big three in the realm of reboots. Here are the five we’d like to see the most.

Gigan is an alien cyborg monster, and that just about sums up why he’s on the list. It also explains why he’s at the bottom of it.

The character’s history is fairly light. He has only appeared in a total of three films, the most recent one being 2004’s Godzilla: Final Wars, and all three of them contributing to the monster’s 0-3 fight record against Godzilla. His cybernetic design can be attributed to his conception and subsequent debut in the 1970s beginning with the 1972 film, Godzilla vs. Gigan, where the Godzilla franchise was shifting from its more allegorical roots into sci-fi spectacles.

To speak honestly, there’s not much depth to Gigan, but damn it, Gigan just looks really cool. Sabre-like hands, laser vision, a buzzsaw for a belly, a built-in jetpack, and, most importantly, a violent disposition makes Gigan fully equipped for the spectacle that any modern-day kaiju reboot is likely to lean on. That being said, there are far more interesting characters that, if given the proper treatment with the right creative and philosophical nuances, could be reboots that audiences would really be able sink their teeth into.

Although, as we continue to delve into the tech-billionaire era of late-stage capitalism, perhaps Gigan would blossom into a more nuanced character than we think.

Anguirus has perhaps the single most colorful history with Godzilla, first appearing in 1955’s Godzilla Raids Again, after which he would go on to be a mainstay in the overwhelming majority of Godzilla films. In that span, he would jump between the labels of enemy and ally more times than we can count.

His legacy alone would make him worthy reboot material, and his quadrupedal, spike-laden form would allow for some delightful fight choreography. As with many entries on this list, the most interesting facet of the character is what he represents thematically, and how that could blossom if given the right material to work with. In Anguirus’ case, he’s described in Godzilla Raids Again as “one of the few creatures that had a thorough hatred for war-like predators” by world animal specialist Plateli Hondon, and so a potential reboot could end up being a surprisingly poignant anti-war feature.

Giant bugs are a surefire way for audiences to quench their thirst for fear, and Kamacuras would be no exception to that. The imposing nature of a giant praying mantis is one that remains relatively untapped in the history of giant-anything movies.

Admittedly, Kamacuras has even less history than Gigan, matching the cyborg’s number of film appearances (if you exclude two cameos via stock/flashback footage). Frequenting other mediums, such as television and video games, it’s even less than that. On top of that, Kamacuras is most widely recognized for his species rather than his character.

Kamacuras flies a bit higher on this list because of the thematic spaces he has the potential to inhabit, particularly in how he could relate to American culture and history. His status as a giant insect, itself a nod to Western relationships with fictional giant bugs, is interesting enough, but it’s thanks to his rampage in Godzilla: Final Wars that one may recognize how the monster could birth an allegorical relationship with America similarly to how Godzilla originally did with Japan.

In Final Wars, Kamacuras attacks Paris and destroys several military air units by simply flying straight into them. If Godzilla, then, originally represented the fear and devastation in the aftermath of the bombings of Hiroshima and Nagasaki, could Kamacuras, a flying terror of destruction, root himself in an allegory involving the aftermath of 9/11, one of the most terrifying and traumatizing events in American history? It would be a perilous task to strike the correct levels of compassion and complexity, to be sure, but the tools are arguably there with Kamacuras.

Hedorah, a monster comprised of ungodly smog and slime, was originally created as a metaphor for Japanese fear surrounding Yokkaichi asthma. It encapsulates a series of debilitating respiratory illnesses caused by Japan’s urban pollution problems of the 1970s. Naturally, it doesn’t take much to dream up how a Hedorah reboot could play on similar, more global fears.

Like Kamacuras and Gigan, Hedorah doesn’t have very many films to his name, and only has a year of history on Gigan thanks to his debut in 1971 with Godzilla vs. Hedorah. Out of perhaps everyone on this list, Hedorah’s potential for allegorical depth is far and away the most palpable with the monster practically staring us right in the eye and screaming to be the center of a climate change-inspired kaiju film. The right creative mind could take advantage of Hedorah’s hideous form, something that anyone would want to avoid looking at, and tie that right into the subject matter.

Perhaps it’s cheating to put Mothra at the very top of the list when the character has already made her bow in the modern MonsterVerse. With her status as the only kaiju who could ever argue for (and, honestly, quite easily claim) a spot in the aforementioned big three of the kaiju world, we couldn’t justify even a number two placement for Mothra.

Barring Godzilla, Mothra has appeared in more films than any other kaiju, and the sheer depth of the character is reflective of this long and storied history. Mothra is often portrayed as a god of peace worshipped by sections of humanity, complete with accompanying muses and a worship song. Her similarities to a wide variety of different deities in different pantheons, including pagan and Dharmic religions, only cracks the possibilities of reboot material wide open.

Mothra is without a doubt a Godzilla-adjacent powerhouse in the world of kaiju, and if any character deserves sole ownership of the spotlight in a solo film of their own, it’s her.