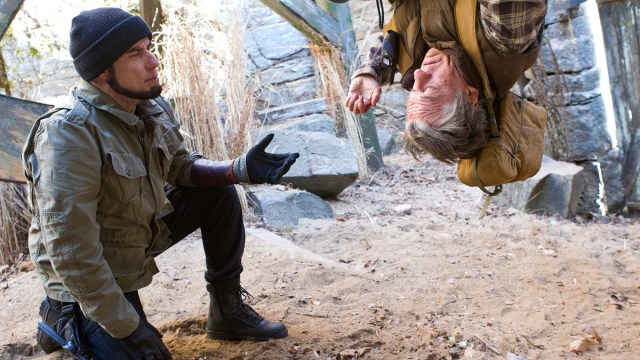 via Millennium Films
Review of:

Those with an interest in the inner workings of Hollywood will know all about the Black List, which celebrates the best unproduced screenplays in the industry. While plenty of those scripts end up getting acquired and turned into feature films, they can often end up getting unrecognizably bastardized along the way, a fate that befell Evan Daughtery’s Killing Season.

At one point, the project was being developed under the working title Shrapnel, with Die Hard and Predator‘s John McTiernan set to direct a 1970s-set reunion between Face/Off co-stars John Travolta and Nicolas Cage, which sounds like the stuff of dreams for action junkies everywhere.

Unfortunately, by the time the end product limped its way to theaters and VOD in July 2013, it was a shell of its original self. Travolta remained onboard, while Robert De Niro tackled the other lead role in what marked the first time the two legends had shared the screen, with Daredevil and Ghost Rider‘s Mark Steven Johnson calling the shots. And oh boy, did it suck.

A 10 percent Rotten Tomatoes score was almost as alarming as Travolta’s beard-and-accent combination, which is truly of the nightmarish variety. About as formulaic and uninspired as an admittedly-ludicrous story about two war veterans engaging in a battle of wits and survival in the wilderness can be, the lashings of grisly violence couldn’t paper over the many cracks.

And yet, because even awful actioners can thrive on streaming, Killing Season has stumbled out of the woods to receive a second chance. Per FlixPatrol, the irredeemable dud has popped up on the iTunes worldwide watch-list, although even the most discerning action enthusiast is better off leaving it well alone.