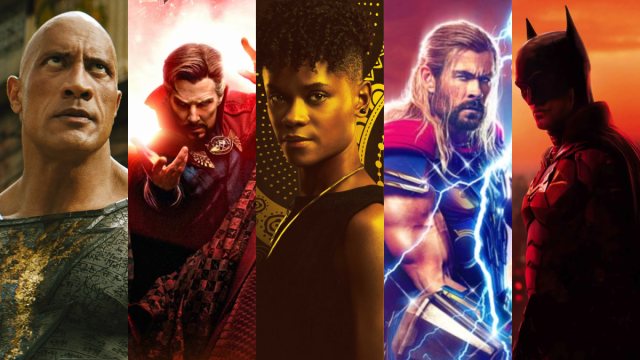 2022 has flown by and with it another packed slate of comic book movies. Maybe not so much in recent years, given the world-stopping pandemic and all, but our regularly scheduled superhero adaptations have decidedly resumed in earnest this year.

As such, the time has come to hearken back to the big-screen comic book escapades we’ve witnessed over the last twelve months, and pick out our favorites of the bunch – and that is exactly what Twitter is up to at the moment.

A lot of love for Matt Reeves’ The Batman and Ryan Coogler’s recently released Black Panther: Wakanda Forever was to be expected — both were phenomenal in their own unique way. We thought the latter film was a particularly beautiful tribute to the late Chadwick Boseman.

On the flip side, there was a resounding chorus of proverbial boos for Thor: Love and Thunder, making the bottom of the majority of responses to a tweet from Culture Crave, which invited its followers to rank the year’s biggest superhero films. In fact, it is getting absolutely dunked on.

It could well be due to the fact that Taika Waititi and the rest of the creatives behind the film decided to steer way too hard into the God of Thunder’s silly side established in Thor: Ragnarok. The stupid space goats immediately spring to mind, which caused us to shake our heads every time they bleated out of turn, ruining what could have otherwise been a beautiful journey of catharsis for both Thor and Jane as she deals with the harsh reality of a terminal cancer diagnosis.

That, and the fact that Christian Bale as Gorr the God Butcher was criminally underutilized. Speaking of underutilized characters, where was Sif? The internet has spoken – the fourth Thor film was an absolute swing and a miss. Turns out that the silliness ratio isn’t the yardstick by which we measure comic book films.

Black Panther: Wakanda Forever executed this concept masterfully, with tragedy striking left and right, M’Baku and Okoye’s quips were still timed well enough to get a genuine giggle out of the audience. Live and learn, Taika – a balance needs to be struck. You pulled it off exceptionally in Thor: Ragnarok – what went wrong?

Regardless, how hilarious is it that not a single mention of Morbius was made?