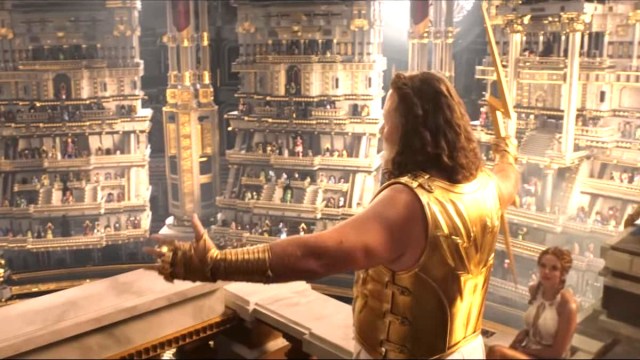 A Thanos-themed ice cream shop in Thor: Love and Thunder has fans debating whether that would be like having a Hitler-themed one in our world.

“Infinity Conez” is the name of the problematic parlor in New Asgard. Its storefront features the Infinity Gauntlet, which Thanos used to genocide half the universe, holding an ice cream cone. Naturally, this raised some eyebrows among MCU fans, with one taking to Reddit to ask, “Wouldn’t making a Thanos themed ice cream store be the equilvant [sic] of making A Hitler one in our universe?”

“Come to think of it . . . ” thinkinting replied, “. . . yah. I think so too.” The Redditor then suggested a politically correct rebranding centered on Iron Man’s gauntlet, since it “saved lives and defeated the enemy.”

SlimStebow stepped in to cite former-violent-enemy-themed products that exist in the real world, like “restaurants and menu items all across the USA named ‘kamikaze,'” referring to Japanese suicide pilots during WWII. “And drinks called Irish car bombs,” which originated from terrorist attacks during Ireland’s Troubles, Aptom_4 added.

It turns out those Redditors didn’t need to draw inexact analogies to make the same point. ToqKaizogou linked to an article on Hitler-themed merchandise in Thailand.

However, the counterargument is that the ice cream shop isn’t about Thanos, per se, but the Infinity Gauntlet. And while it did erase half the beings in the universe, Tony used it to bring them back.