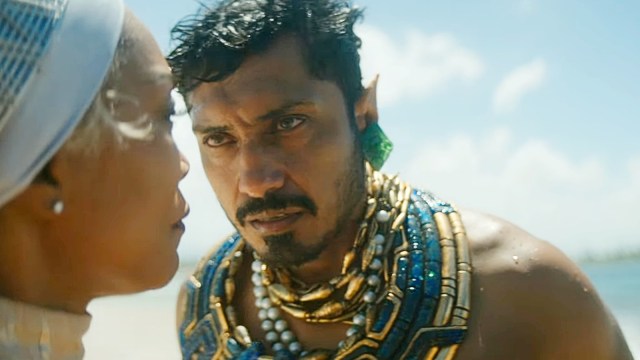 Black Panther: Wakanda Forever sees Wakanda mourn the passing of their King T’Challa after Marvel decided not to recast the role post Chadwick Boseman’s death in 2020. The film, in addition to being a rumination on grief and loss, features two nations at battle — Wakanda and Talocan.

The leader of Talocan, King Namor (Tenoch Huerta) is introduced in Black Panther: Wakanda Forever. Namor is a mutant, who possesses extraordinary abilities, and is the main antagonist of the movie. Namor makes short work of the Wakandan defenses in the film, but as it is a Marvel movie, the heroes do eventually prevail. The Wakandans, particularly Shuri aided by Riri Williams, manage to briefly gain the upper hand against Talocan by weakening Namor.

The one weakness of the seemingly invincible Namor

After Namor attacks Wakanda, resulting in the death of Queen Ramonda (Angela Bassett), Shuri (Letitia Wright) and Riri Williams (Dominique Thorne) put their heads together to try and theorize how they might be able to take down Namor. Namor doesn’t seem to be governed by the limitations that his fellow Talocans have, i.e., he can breathe both below the water surface as well as on land without the aid of a water mask.

But the duo works out that despite not desperately needing water, Namor is indeed rejuvenated and fueled by it. They notice that while he is naturally powerful during his attack on Wakanda, his powers are amped up when he resurfaces after diving into the water. So, Shuri and Riri deduce that Namor does need water to breathe and to keep his powers at full capacity. If they can dry him out, they may get the seemingly unattainable victory against him.

They plan that if they essentially blast him with hot air, which might be an oversimplification, and keep him away from water, he would dry out and would be essentially helpless. So, in the final fight, they rig one of their Royal Talon Fighters to blast the interior of the ship with oxygen, drying Namor’s skin and weakening him. And it does work, Shuri — now the Black Panther — baits him into the ship for her trap and weakens him. But he ultimately manages to crash the ship, forcing the pair to continue their fight on land.

Even in his weakened state, he manages to dominate the fight and fatally stabs Shuri, but the latter causes the engine of the fallen ship to blast, further sapping him of his remaining strength. It’s likely that he stores any excess water in his skin and an explosion causes the water to evaporate, putting him in an even worse condition. In the comic books too, most of his weaknesses are tied to an imbalance of air or water, and he usually flies into a rage when he stays in one environment for too long.

Catch Namor and his sensitive skin in Black Panther: Wakanda Forever in theaters.