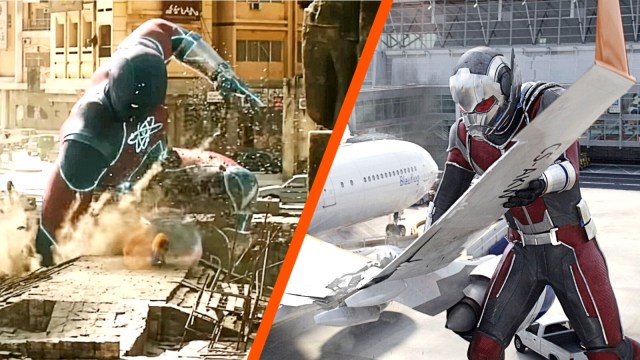 With the release of the latest DC Extended Universe film, Black Adam, the character Atom Smasher — a member of the Justice Society of America — is already drawing comparisons to the Marvel Cinematic Universe’s Ant-Man. But just what are the differences between the two?

Noah Centineo is the actor who portrays Albert “Al” Rothstein, aka Atom Smasher, in the DCEU film Black Adam, which just arrived in theaters on Oct. 21. Whereas Paul Rudd’s Scott Edward Harris Lang, aka Ant-Man, debuted in the MCU in 2015’s Ant-Man.

One of the biggest things that Ant-Man and Atom Smasher have in common is the fact that they can both enlarge their sizes to that of a large building. However, only Ant-Man is able to shrink his size down to that of an insect. Occasionally, Ant-Man can also shrink down to the subatomic level, but he requires a modified suit in order to navigate the Quantum Realm’s time-bending world safely. When Ant-Man shrinks down, he receives enhanced superhuman strength and durability. Ant-Man’s strength and durability also increase when he enlarges himself, but it comes at the cost of having trouble balancing and moving slowly. Ant-Man can also become exhausted when staying in his giant form for too long, according to the MCU Wiki.

As previously mentioned, Atom Smasher can increase his size considerably. This grants him superhuman strength and durability as well, to the point that his skin becomes so tough that he can withstand bullets without them penetrating his skin, though they can still cause him pain, as the DCEU Wiki has pointed out.

Both Ant-Man and Atom Smasher have specialized suits, but they have very different purposes. When it comes to Ant-Man, the suit itself and the Pym particles it utilizes are the very things that grant Scott Lang his shrinking and growing powers and changes size with him.

However, with Atom Smasher, his growing powers were inherited by his uncle, Al Pratt, aka the superhero known as Atom. Hence, Atom Smasher does not even need a suit in order to grow and can even enlarge wearing no clothes at all. In fact, Atom Smasher enlarging himself while wearing nothing but his birthday suit is even something that happens in the official Black Adam movie prequel comic book Black Adam – The Justice Society Files: Atom Smasher. But the red and blue suit that Atom Smasher’s uncle gives him has the ability to adapt to his size changes. The suit also has the handy characteristic of being bulletproof and fireproof as a defense mechanism.

Something that Atom Smasher and Ant-Man have in common is the fact that both characters are taking on the mantle of an older mentor figure. In the case of the MCU, Michael Douglas’ Hank Pym was the original Ant-Man who even palled around with Iron Man’s dad back in the day. Hank essentially lured the thief Scott into stealing his suit in order to recruit him as his successor.

In Atom Smasher’s case, he also became the successor of a superhero role once occupied by his uncle. Atom Smasher even took over his uncle’s seat in the superhero team known as the Justice Society of America.

If you want to see Atom Smasher wreaking havoc alongside Dwayne Johnson’s Man in Black, check out Black Adam in theaters now.