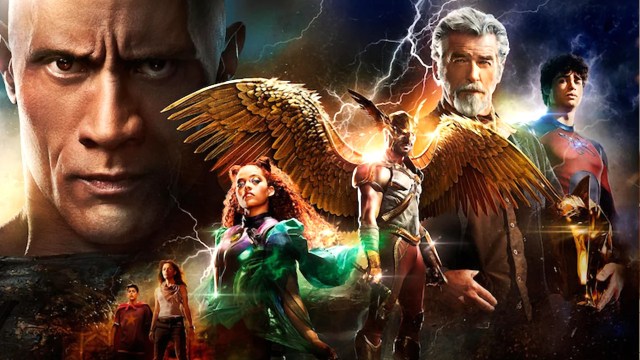 Black Adam is finally here, and while the jury is still out on whether it will single-handedly save the DCEU as optimistic fans have predicted, at the very least the Dwayne Johnson vehicle opens the door to an exciting new corner of the franchise. While The Rock’s anti-hero is the one with his name in the title, hardcore comic book readers may be more thrilled by the movie’s inclusion of the Justice Society of America.

For the ones less well-versed in the DC lore, however, the arrival of the Justice Society just a few short years after Superman, Batman, and company formed the Justice League on our screens may be somewhat confusing. So what is the Justice Society and how does this team of superheroes differ from their more famous, and similarly named, cabal of costumed counterparts? Let’s take a look.

The most important thing to know about the Justice Society is that the group actually predates the Justice League by two whole decades. Created in 1941, the JSA was born out of the Golden Age of Comic Books and is recognized as the first superhero team in the medium’s history. After the company’s various characters had become hits individually, All-Star Comics — the predecessors of DC Comics — decided to unite them in a truly all-star crossover title, thereby affecting superhero storytelling for the rest of time.

The original founding members of the JSA were Doctor Fate, Hourman, the Spectre, Sandman (no, not the Netflix one), Atom, the Flash, Green Lantern, and Hawkman. The group’s roster changed much over the course of the following decade, however, as there was a rule in place that whenever a hero received their own comic book they had to leave the team. Superman and Batman served as “honorary” members, although Wonder Woman was initially, and infamously, only allowed to be the gang’s secretary.

Following the birth of the Silver Age, the Justice League was formed in 1961, populated by the aforementioned trinity of DC icons as well as new versions of the Flash, Green Lantern, and more. At first, the JSA were retconned as hailing from another universe, Earth-Two, before Crisis on Infinite Earths later compressed the continuity, making the JSA the JLA’s precursors on Earth-1.

Ever since the 1990s, a modern version of the Justice Society has been in operation, made up of such members as Wildcat, Doctor Mid-Nite, and the team’s poster girl, Stargirl. Black Adam is far from the first time they’ve made it to live-action, as the JSA has previously appeared in Smallville, Legends of Tomorrow, and, obviously, The CW’s ongoing Stargirl TV series.

How is the Justice Society different in Black Adam?

The illustrious history of the Justice Society is sadly sidelined in the team’s DCEU depiction in Black Adam, as the movie incongruously portrays the group as more of a substitute or B-team to the Justice League that reports to Amanda Waller and A.R.G.U.S., much like Task Force X/the Suicide Squad.

Their roster is also much smaller, with only four members aiding Johnson’s Adam in the film. These are Hawkman (Aldis Hodge), Doctor Fate (Pierce Brosnan), Atom Smasher (Noah Centineo), and Cyclone (Quintessa Swindell). Stargirl was originally supposed to be on the roster, but The CW’s current use of the heroine quickly nixed that notion.

But JSA fans hoping to see a much larger legion of law upholders should hopefully only need to be a little patient as it’s believed that DC hopes to make a Justice Society spinoff film off the back of Black Adam. So do your bit to ensure the team’s future in the franchise by checking out the movie in theaters this weekend.