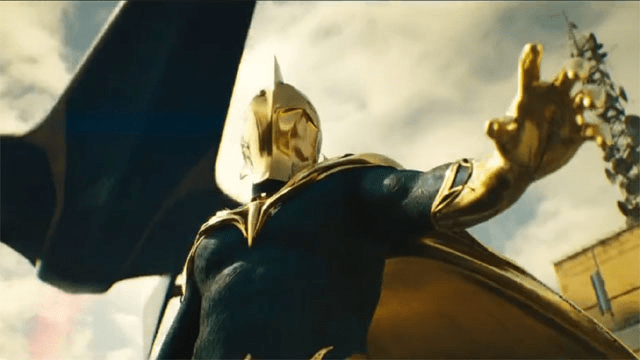 Created way back in 1940, Doctor Fate is one of the most powerful heroes in all of the DC Universe, and the role requires an actor with the stature and gravitas to represent him properly in Black Adam. Pierce Brosnan was chosen to portray DC’s sorcerer supreme, and he’s more than up to the task.

Brosnan will be seen playing Kent Nelson, aka the mystical Doctor Fate and founding member of the Justice Society of America, which is in fact the DC Universe’s first superhero team. They’ve been chosen by Amanda Waller (Viola Davis) to rein in Black Adam (Dwayne Johnson) who’s causing havoc in Kahndaq. If the Black Adam trailer is anything to go by, it’s going to be one uphill battle against this titan.

Doctor Fate’s powers come from the Helmet of Fate, and it’s both a gift and a curse that he’s shackled to. He can fly and summon magical constructs and blasts, and in one scene he holds back Black Adam using multiple versions of himself. He also has to live with the burden of seeing the future, and Kent does his best to use this wisely. He speaks words of compassion to Black Adam to cool his fires, but he’s a hard one to reason with.

More Fun Comics #67 by Jerry Siegel and Bernard Baily revealed the origin of Doctor Fate. Kent Nelson was a young boy who was exploring Mesopotamia with his father, archeologist Sven Nelson. Sven believed that the pyramids were created by extraterrestrials and not the Egyptians, and he was determined to find out the truth. The Nelsons entered an old temple, and when Sven was in the Chamber of History, Kent wandered off. In another area, he found the statue of Nabu the Wise, who manipulated him into operating a lever to bring him to life. Kent obeyed, unknowingly releasing poisonous gas, which killed his father.

As a form of compensation for his father’s death, Nabu decided to teach Kent the mysteries of the universe and how to wield magic. Nabu came from the planet Cilia with other Lords of Order, who were sentient beings that existed at the beginning of time in opposition to the Lords of Chaos. In 3500 BCE, Nabu the Wise left Cilia and traveled to Earth where he became an adviser to the pharaohs of ancient Egypt. After a battle with an incarnation of Wotan, Nabu trapped himself inside the temple to heal.

Nabu turned the young Kent into a full-grown man and gave him the golden Helmet of Nabu, the Amulet of Anubis, and the Cloak of Destiny, transforming him into Doctor Fate with an array of magical and elemental powers. With the helmet on, Nabu and Kent were connected, and they worked together to restore order. His base of operations was the Tower of Fate located in Salem, Massachusetts. It’s a four-sided pillar with no windows and no doors, and it’s a doorway between realities that hosts a wide collection of useful artifacts and tomes throughout the ages.

Fate would become a founding member of the All-Star Squadron and the JSA, but the relationship between the man and the entity wasn’t always smooth. Over time, they wouldn’t always agree on the correct course of action, and Nabu even withheld information. Kent was meant to merge with his love, Inza Cramer, to form Doctor Fate. He fought a Lord of Chaos who used her against him by taking hold of Inza, which weakened Fate considerably. He continued to fight through it. His love for Inza prevailed, and he defeated the Lord of Chaos. However, when he traveled into another dimension to find a Lord of Chaos named Vandaemon, he lost. Fate returned home having lost ,and sadly Inza had left him.

Vandaemon teamed up with the fallen Lord of Order, Ynar, and things looked even worse for Doctor Fate. Inza returned, and they merged using the Helmet of Fate and overpowered their enemies. Afterward, Fate became a founding member of the new Justice League, and they fought Darkseid. When he left for space after fighting the Gray Man, a sorcerer who feasted on dreams, Fate wouldn’t return until the late 1980s. That’s when the Lords of Order departed to let chaos consume the world and bring about the golden age.

With chaos and order imbalanced, Kent and Inza began to age rapidly, and Inza committed suicide. Nabu refused to release Kent until a new host body was found, and Eric Strauss was chosen. A mystical bond was needed, and Eric’s stepmother, Linda, was chosen for them to become the new Doctor Fate. After this, Nabu allowed Kent to die.

As with most comic book characters, Kent’s death wouldn’t last forever. He and Inza lived their lives in the Amulet of Anubis. They raised a child, Kent Jr., and they were happy together. However, Fate had other plans, and they were persuaded to come back to Earth because the world needed them to fight the Lord of Chaos, Anti-Fate.

During the battle with Anti-Fate, Linda died, and her soul went into a recently deceased woman while Eric’s soul shifted into the woman’s husband. Nabu chose to become human and entered the reborn couples’ unborn baby. Kent and Inza then became Doctor Fate again.

Kent and Inza lost their powers after a fight against Extant during Zero Hour by Jerry Ordway and Dan Jurgens. When they tried to get the power back from the mercenary Jared Stevens, who recovered it from Egypt, he refused them. The magical items chose Jared as the new host over Kent and Inza, who were defeated after battling the servants of the demon Kingdom. Their spirits would then go back into the amulet and remain there for many years.

Doctor Fate in the modern era

Doctor Fate returned in the modern era all thanks to Green Lantern Hal Jordan. Fate placed a part of himself into the Green Lantern ring when they had shaken hands years ago, and he was able to return to Earth again. Later, Doctor Fate joined the Justice League Dark, the team of magical superheroes that took on the magical problems in the DCU that the main Justice League couldn’t handle. He worked alongside Wonder Woman, Zatanna, John Constantine, Swamp Thing, Detective Chimp, Man-Bat, and he taught the ways of magic to a young protégé, Khalid Nassour.

Khalid is an Egyptian-American medical student from Brooklyn who wanted to become a doctor more than anything. Little did he know that the Egyptian gods would choose him as the new Doctor Fate when the young man encountered the Helmet of Fate in the Brooklyn Museum. He had to learn how to save the city from angry gods. Thankfully, his great-uncle Kent Nelson came along and helped him traverse this magical path as his trusted mentor, and the two of them join the League Dark.