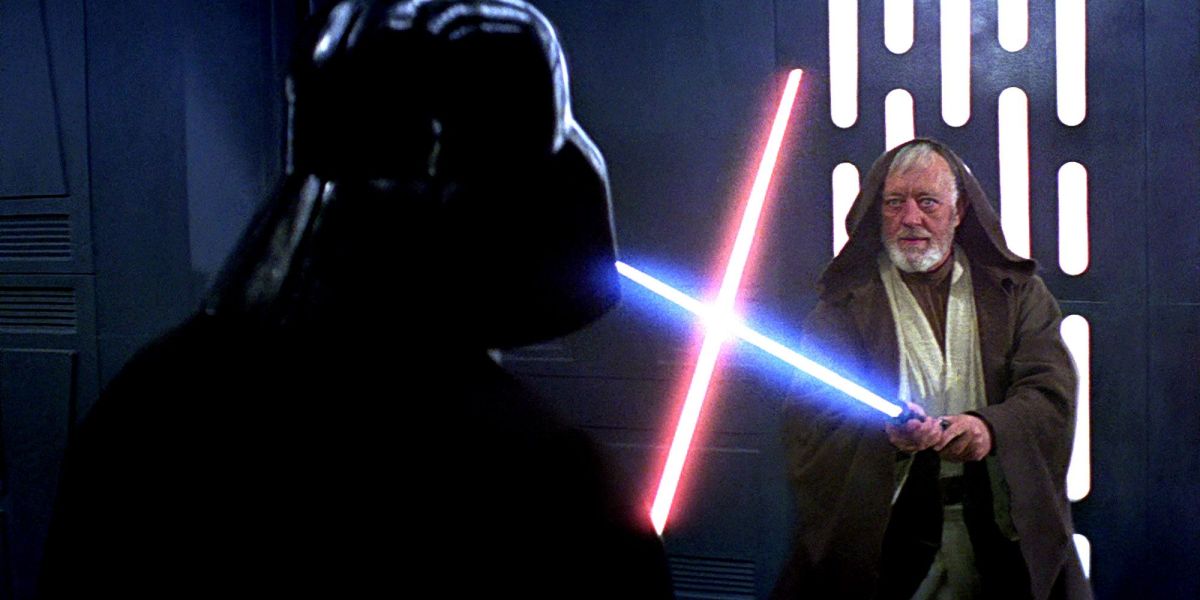 Halfway through Star Wars Episode I: A New Hope, something extraordinary happens. Reunited with his old enemy (before we knew they were old friends), Obi-Wan Kenobi engages Darth Vader in a lightsaber duel aboard the Empire’s terrifying Death Star. It’s not the subdued sparring that sticks out ⏤ it’s when Obi-Wan utters the chilling words, “If you strike me down, I shall become more powerful than you can possibly imagine.” As the aged Jedi lifts his blade and allows Vader to strike him, his robes fall to the floor, empty.

Looking back more than four decades on, it’s a bit like the What the Fluff social trend that had dog owners around the world trying to fool their pets with a sheet. It certainly vexed the Dark Lord of the Sith, who was left prodding the discarded Jedi robes with his mechanical foot.

Later in the film, we learned that the old Jedi’s essence had survived as a disembodied voice that could encourage Luke Skywalker after death. Without him, the pilot wouldn’t have been able to destroy the site of Obi-Wan’s death. In the next movie, we saw that the old Jedi Knight could also manifest as a Force spirit. Over 40 subsequent years of Star Wars mythology have expanded that on that short but important scene. We now know that Vader had killed many Jedi by that point but had never had one disappear on him.

For 22 years after A New Hope, expanded fiction assumed that all Jedi disappeared when they died based on Obi-Wan’s actions. It was a surprise when Qui-Gon Jinn didn’t disappear when Darth Maul killed him in Episode I: The Phantom Menace.

What happens when a Jedi disappears

What isn’t a surprise is that the Sith are a lot showier with their Force powers than Jedi. While one as powerful as the Emperor demonstrated tremendous physical manipulation of the Force in all three Star Wars trilogies, it’s far more like a Jedi to mysteriously disappear. The two powers help define the two sides of the Force. Force lightning is devastating but short-lived. The ability to become one with the Force in death has far-reaching consequences.

Despite seeing many of the franchise’s leading Jedi as Force Ghosts, or Spirits, Obi-Wan’s vanishing act remains rare, especially on film. It’s the expanded Star Wars universe that has filled in the gaps since the prequel trilogy revealed the truth.

The Clone Wars series revealed that Qui-Gon Jinn had learned the art of becoming one with the Force from the Force Priestesses of the legendary Force planet known as the Wellspring of Life. However, as Jinn’s training was incomplete when he died, he could only manifest as a voice after death.

The first hint of this emerging power came at a pivotal and dark moment in Anakin Skywalker’s journey to the dark side. When the young Jedi was about to murder Tusken Raiders in revenge for his mother’s death in Episode II: Attack of the Clones, Jinn called out to stop him. Although Skywalker was too engulfed by anger to take notice, it looks like Yoda notices something more than rage and pain.

At that time, in the final years of the Galactic Republic, the ability to become one with the Force was a lost art, unknown to Sith Lords and Jedi Masters alike. Qui-Gon Jinn passed the knowledge on to his former apprentice Obi-Wan Kenobi and Master Yoda from beyond the grave.

In The Empire Strikes Back, Darth Vader is adamant that Obi-Wan Kenobi can no longer help Skywalker. He confidently reassures the Emperor that Skywalker junior is alone and later taunts Luke about his mentor’s death. In the hindsight of the expanded universe, Vader’s dismissal is a sign of his dedication to the dark side.

As Yoda states, when confronted with a dark side illusion in The Clone Wars, the Sith are captivated by the physical realm. Nothing proves that more than the hideous ambition of Vader’s master Darth Sidious, also known as the Emperor.

In Episode III: Revenge of the Sith, the then-Chancellor Palpatine tells Anakin of his former master’s quest for immortality, which he unsubtly calls “the tragedy of Darth Plagueis the wise.” It plays heavily into the manipulation of Skywalker, but it also explains many of Palpatine’s actions. He tells Skywalker that Plageuis had created life from the manipulation of Midi-chlorians, confirming that eternal life was a primary goal for the Sith.

Unsurprisingly, this was the springboard for Palpatine’s return in Episode IX: Rise of the Skywalker. Palpatine’s survival is more akin to the Transfer Essence power explored in Star Wars Legends stories like the comic Star Wars: Vector. A dark power, it enabled Sith to transfer their essence through clones. While that was something Plageuis deliberately avoided as he sought to retain his body, both approaches demonstrated the Sith’s physical approach to immortal life.

While the Jedi could uncover the lost knowledge of Force Spirits and survive with their essence, if not their bodies, the Sith couldn’t comprehend that such an ability existed. That same block in Sith philosophy stops Vader from seeing the truth until, in redemption, he becomes one with the Force himself in Return of the Jedi.

Before the Star Wars canon was pruned in 2014, Sith Force Ghosts were part of the mythology, accompanied by far more disembodied Jedi. Although these are no longer a part of the main continuity, these stories still exist under the Star Wars Legends banner.

Passing on the knowledge

At the end of the sequel trilogy, we see the original new hopes, Luke and Leia, as Force Ghosts, ready to pass the baton of their name on to Rey as she rejects her Palpatine lineage. Luke Skywalker had died in the previous film after what might be the most remarkable display of Jedi power in the franchise. Before death, Skywalker projected himself across the galaxy to fool his wayward nephew Kylo Ren. This time a Sith was fooled by a Force Spirit before the Jedi’s death. Still, the exertion is enough to kill Skywalker, who disappears, typically, against one of his favored sunrises.

A Jedi with the training of Qui-Gon Jinn never really disappears. They become one with the Force.