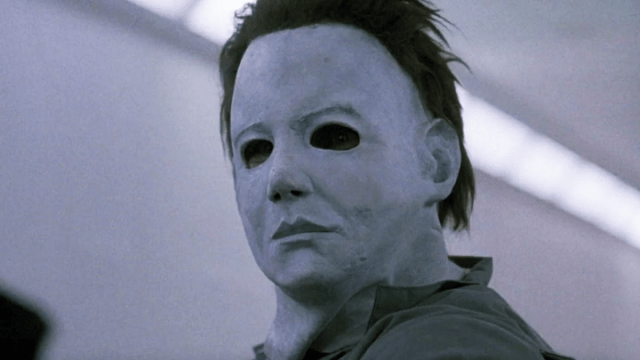 Among a slew of recognizable horror villains that have obtained a spotlight in pop culture, Halloween’s Michael Myers is undoubtedly the most popular killer that the massive slasher genre has to offer. Through multifarious timelines, remakes, sequels, and reboots, one constant has remained the same: The Shape is a fire-breathing, merciless, psychopathic killer that never utters a word during his vicious warpath. While there are a handful of memorable horror villains that refuse to speak at the most gruesome times, Myers unequivocally harbors a glaring intrigue that keeps fans coming back for more.

Despite his brute strength and intimidating presence, horror fans have been asking themselves the same question for over four decades: why doesn’t Michael Myers talk? While plenty of folks have drawn their own conclusions throughout the years, there are several theories as to why the formidable antagonist never speaks.

So, why doesn’t Michael Myers talk?

One of the biggest theories as to why Michael keeps his lips sealed is the simple fact that he’s a dangerous psychopath who doesn’t feel the need to speak. Even during his weekly visits with Dr. Sam Loomis at Smith Grove Sanitarium, it was constantly reported that Michael wouldn’t talk to him. Instead, Loomis spent all those years looking into Michael’s monstrous eyes, which Loomis referred to as the “blackest eyes; the devil’s eyes.” In fact, it is revealed several times throughout the franchise that Michael refused to speak after killing his sister Judith. Although it has never even been proven that Michael spoke before that, unless you’re counting the Rob Zombie remakes.

Another theory that has been tossed around is that Michael doesn’t speak because of his possession under the satanic Cult of Thorn. In later Halloween lore, it is insisted that Michael is under an evil curse that was placed upon him by the ancient cult. According to the curse, Michael is to kill every single member in his entire bloodline, which will supposedly end the curse. As a result, folks believe that because of the curse’s tight grip on him, Michael refuses to speak and instead keeps his focus solely on murder.

Regardless of the exact reason for Michael’s silence, it further establishes his spine-tingling presence that adds a special allure to the movies as a whole. Although it still remains to be seen if Michael will speak at all in Halloween Ends, the phenomenon surrounding the infamous villain reminds us that The Shape will forever be a silent force to be reckoned with.