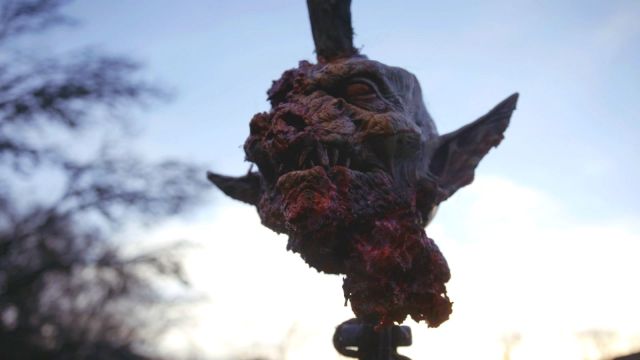 Horror is almost overwhelmingly set in the modern era, or maybe if you’re lucky, as far back as the early 1900s. Given how much the occult fascinated our ancestors, including ones from several centuries ago, it’s a shock we don’t see more horror movies set then.

Then comes along a medieval horror movie in 2018, which seemingly nobody remembers nor cares about in The Head Hunter, which is currently on the prowl for a new audience of genre hardcores. Perhaps not surprising nobody has much memory of it, with the budget just $30,000 and going nearly straight to video-on-demand.

The Head Hunter sees a fantastical bounty hunter work for a local kingdom doing what amounts to security errands, knowing deep down a monster will one day return and finally pose a real challenge to him The titular character is played by Norwegian actor Christopher Rygh, with the film shot in the United States, Portugal, and Scandinavia.

Grossing just $44,000, if you have actually seen it in cinemas, you’re part of an extremely elite group. Though it’s not the most horrific horror movie you’ll ever see, it’s got some brilliant gruesome deaths and bloodthirsty foes. Creature design of impeccable quality as well.

There’s very, very few medieval horror movies, unfortunately. There’s a certain Dark Souls grimy vibe to the universe they create, and thankfully it’s R-rated and goes for the jugular. Not since Army of Darkness has a film so knowingly gone for medieval aspects with fun horror.

Directed, produced, written by Jordan Downey, it’ll go down as a unique auteur effort which does deserve to see some more love. Whenever you see a film developed on a budget this size, you can’t help but appreciate the effort more than you usually would.

The Head Hunter is available to stream on Amazon Prime.