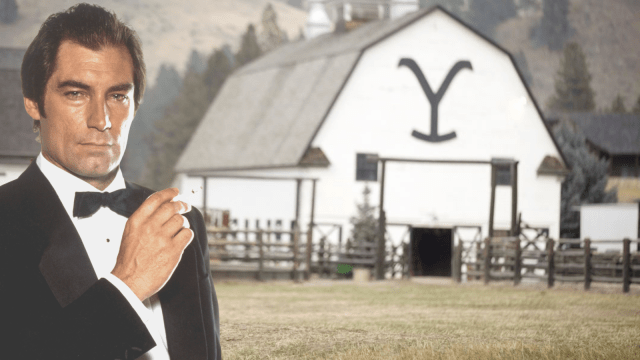 From being Britain’s most dangerous spy to a powerful Montana man during the Great Depression: former James Bond actor Timothy Dalton will be joining 1923, the prequel series to Yellowstone.

Dalton will play the role of Donald Whitfield, a character described as a powerful, self-confident man who reeks of wealth, and lacks empathy. Whitfield is intimidating and nefarious and is used to getting what he wants, according to Variety.

Timothy Dalton is arguably most well known for taking up the mantle of agent 007 for 1987’s The Living Daylights and 1989’s License to Kill.

1923 is a prequel to the Paramount series Yellowstone. It will bring focus to a previously unseen generation of the Dutton family and explore themes from the titular time period – the Spanish Flu, drought, Prohibition, and the Great Depression.

Dalton will be joining other high-profile cast members Harrison Ford and Helen Mirren for the series.

Yellowstone, in case you’ve been living under a rock, is a modern Western series which follows the Dutton family, owners of one of the largest ranches in the United States. They are constantly pitted against adversaries who seek to relinquish them of the land beneath their feet.

1923 isn’t the only spinoff following a different generation of the Dutton family, with 1883 following an even earlier generation of Duttons and explores how the family initially came to own the land.

1883 and Yellowstone are currently available to stream on Paramount Plus and Peacock respectively, while the next tale chronicling the Dutton family, 1923, is set to premiere in Dec. 2022 on Paramount Plus.