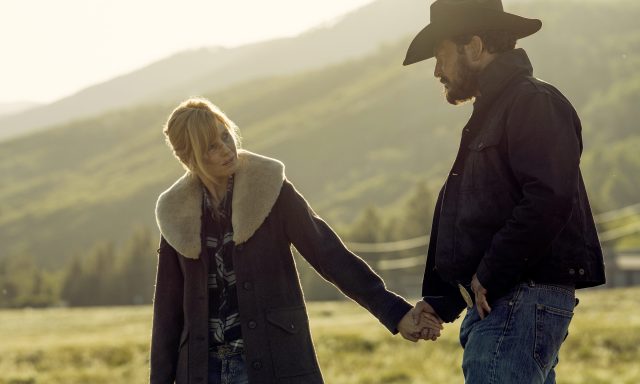 Warning: This article contains spoilers for the premiere of Yellowstone.

Yellowstone‘s highly anticipated fifth season began airing on Paramount this evening, and fans can’t get enough of the fast-paced and emotionally charged premiere.

One of the storylines fans were most anxious to see was that of Beth and Rip’s happily ever after. With the shotgun wedding taking place in season four, fans knew that their relationship would be a highlight of the new episodes.

With all of the changes taking place, it was a beacon of light we could look forward to. It was something we could anticipate with joy, so when we cried big tears about them during the first episode, it was more emotional than we expected.

The emotionally charged conversation is a significant moment between them, though, and will undoubtedly lead to a road with more joy, but first — Beth had something she had to get off her chest.

“I’m sorry.”
“What’d you do.”
“Nothing recently, for what I did then — I’m sorry.”
“When then, Beth?”
“This is a sort of blanket apology to generally, you know, cover the past.”
“The past?”
“Yeah, everything before right now, that’s what I’m sorry for.”
“I was fu— awful to you. I was terrible, and if it’s any consolation, I was worse on myself.”
“You know what your problem is? It’s that this *points to her head* is almost as big as this *points to her heart*.”

Rip tells Beth that he’s the only one who knows how big her heart is or that she genuinely has one at all. He tells her that she has to stop fighting with herself and find someone else to be at war with. That she can’t keep beating herself up because they’re together now, and the past doesn’t matter anymore.

Beth hints that there’s something it took away from them, something they needed, but Rip assures her that she’s all he needs; she always has been.

A flashback of the two when they were younger further proves that it’s always been Beth for Rip. He’s loved her from the moment their paths crossed, but she’s been scared of the magnitude of that love in all ways that it could change her. Her fear caused her to push him away before, and there’s still a piece of that wall she’s gripping now.

As season five continues to unfold, we have a feeling that this might just be the time when Rip can convince Beth that she’s enough for him in every way she exists and in all the ways Beth is unsure where she should be — she is it for him.

What a romantic idea; here’s to our favorite television couple as they figure it out.