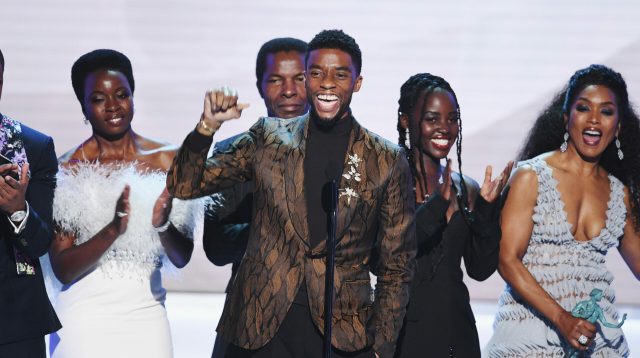 Hall H is abuzz with all things Marvel, as one of the most highly anticipated panels of San Diego Comic Con takes place. While there’s a lot on the agenda regarding upcoming content and new storylines to share, fans can’t stop thinking about a beautiful moment five years ago when Black Panther had its SDCC debut.

The official Twitter page for Black Panther shared footage from Hall H half a decade ago, when the film’s cast saw the highlight reel for the first time. Seeing those clips among a group of excited fans was a moving experience for everyone involved. The room was filled with joy, pride, and a sense of utter excitement as an emotional cast, specifically Chadwick Boseman, wiped tears as they danced and shared in the fruits of their labor.

The world of Wakanda was unlike anything fans had seen before, and not just those who love Marvel. It was futuristic, beautiful, and advanced beyond our wildest dreams — across all film genres. The characters were multifaceted, kind, and compassionate — and the entire story was an adventure.

Of course, since the untimely passing of Chadwick Boseman, fans know that Wakanda will once again be a place that looks different to us. The actor so wholly took on the mantle of the superhero, on and off camera, that it will be an emotional journey to see the second chapter without him. His loss makes the passion he always gave to the Marvel experience and the aforementioned footage even more treasured.

Of course, many of the responses are about missing Chadwick Boseman, and rightfully so.

Tears understandably welled up in the eyes of many fans.

It was a beautiful time to be a fan of Marvel.

We all want to go back and take it in once more, experience the feelings and emotions all over again, and cling to that feeling a little longer.

“Pure” is the most fitting word to describe it.

Black Panther: Wakanda Forever will take us on a new journey, and while it’s yet to be determined in what capacity Boseman will exist in it, we know his legacy on the character, the MCU, and all of us will remain for lifetimes to come. He will live on in the hearts of his co-stars, fans, and the intricately written storyline forever.

The world of Wakanda still has beautiful elements to explore, and we’re excited to see the future while honoring the past, here’s to a beautiful tomorrow.