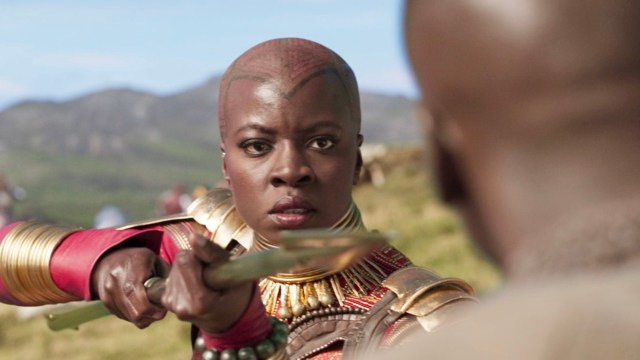 Black Panther: Wakanda Forever featured some of the most exciting battle scenes we’ve seen from any MCU movie to date. Danai Gurira, who plays Dora Milaje leader Okoye, is a big reason for that. Turns out that she became addicted to combat training while preparing for the film.

In a recent interview with SlashFilm, Gurira revealed that she relished her combat training for the movie so much that she was literally counting down the days until she could do it again. And this is someone who’s no stranger to combat training, as she played zombie slicing machine Michonne in The Walking Dead.

One of the most pivotal scenes in the movie is her bridge fight with Atuma. Gurira said she suffered a few injuries during preparation, but that made her even stronger in the long run.

“It was very arduously intense to learn that fight. I also incurred some little injuries here and there, so I was dealing with PT. But funnily, PT after an injury can make you stronger in an area than you were before — so it was a very interesting physical journey to get to the point where those fights were in my body.”

After that, the actress said, something clicked inside her and she became obsessed.

“I got really maniacal about it — I was wanting to train all the time and I was pushing to get trained and they’re like, ‘We’re not training until Thursday.’ I was like, ‘No, no, no — I’m coming in tomorrow, which is Tuesday, and I need you to just give me a corner, a mat, and my trainer, and I’m good.'”

One of the reasons the bridge fight was so intense is because Okoye feels genuinely outmatched with Attuma. Because of this undeniable fact, Gurira said she put in extra effort when it came to training to prepare for it.

“I was kind of that person who was a little all over it all the time, because I just really wanted to get to the point where it wasn’t a thought and I wasn’t thinking when I was doing it. That’s where you have to get to by the day. And that requires so much drilling, and so much work, and so much connection to the psychology behind what you’re doing in the scene.”

That wasn’t all. To make sure that she was absorbing all of the training, she said she recorded “every single rehearsal” on her phone “because then I’d go home and study it, show it to my trainer, and deal with my form.”

She also shared that she plans to release those videos at some point. Black Panther: Wakanda Forever is in theaters now.