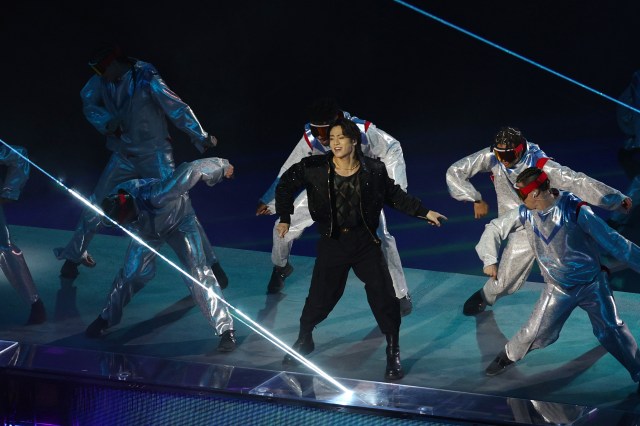 Photo by Elsa/Getty Images
Review of:

The FIFA World Cup has ascended upon football fans from around the world once again in Qatar as Ecuador has already given viewers one of the greatest moments they will never forget with a head knock into the goal. Too bad Jungkook of BTS already stole that thunder with the release of “Dreamers” during the opening ceremony.

Actually, the World Cup will give fans plenty of moments to remember as each game progresses. What Jungkook gave everyone were words of encouragement for all the players. “We are the dreamers. Because we believe it,” he sang.

This year’s World Cup has been filled with its share of controversies before the first match ever started. A number of celebrities opted to boycott the opening ceremony, which garnered headlines around the globe. The Middle Eastern nation has been under scrutiny by human rights activists for its treatment of migrant workers in constructing the World Cup stadiums as well as Qatar’s stance on LGBTQ+ issues.

Despite the allure of a global audience and massive paydays, FIFA had a tough time finding its headline performers for the opening ceremony. Reportedly Shakira was offered a mega contract. Meanwhile, Dua Lipa was rumored to be in the running, but she made it clear that she wasn’t interested, citing Qatar’s reputation regarding human rights. “I look forward to visiting Qatar when it has fulfilled all the human rights pledges it made when it won the right to host the World Cup,” she stated. Even rock legend Rod Stewart recently noted that he rejected a seven-figure payoff for a concert in Qatar.

At the end of the day, it was the Kpop phenom Jungkook who took the stage, much to the delight of his millions of BTS ARMY followers.