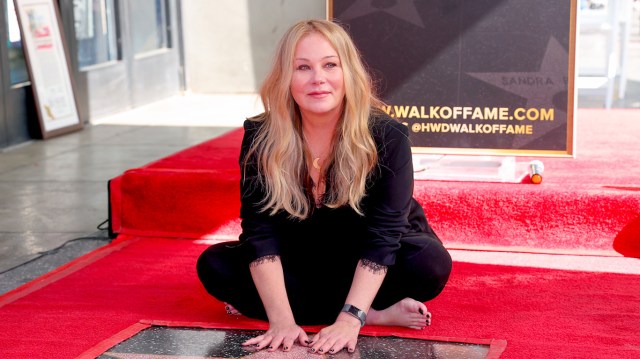 It’s been a little over a year since national treasure and star of Dead To Me, Christina Applegate, revealed she was diagnosed with Multiple Sclerosis – a neurological condition that disrupts how the brain talks to the body. Now the actress has made her first public appearance since revealing her condition to the world.

Applegate, 50, attended a ceremony in Los Angeles to accept a star on the Hollywood Walk of Fame, according to Us Weekly. Her Married… With Children co stars David Faustino and Katey Sagal gave speeches in honor of the actress, along with Dead to Me showrunner Liz Feldman, and co star Linda Cardellini.

Applegate was barefoot and took the stage with help from Sagal and a cane. Sagal said she admired Applegate’s resolve. “You bend but don’t break. Your humility and irreverence allows all of us to bend with you,” she said.

Applegate’s eyes were misty when she took the podium.

“I can’t stand for too long, so I’m gonna thank the people that I really need to thank,” she said, mentioning her family and agent. She also said her daughter Sadie was “the most important person in the world” and that she was “blessed every day” to have a daughter like her.

She also touched on her diagnosis.  “Oh by the way, I have a disease. Did you not notice? I’m not even wearing shoes. You’re supposed to laugh at that,” she said.

Back in October, Applegate hinted that she had a big event in the works. “I have a very important ceremony coming,”she said, next to a picture of walking sticks. “This will be my first time out since diagnosed with MS. Walking sticks are now part of my new normal. Thank you @neowalksticks for these beauties. Stay tuned to see which ones make the cut for a week of stuff.”

Applegate has had various health struggles in the past and has been very open about it. In 2008, she had a bout with breast cancer. She had both breasts removed, as well as her ovaries and fallopian tubes in 2017. She started her own charity, Right Action, in 2009, which helps women who don’t have insurance pay for MRIs.

She told Variety that getting a star on The Walk of Fame means you are “leaving your mark.”

“This is something that is going to be there forever. And it’s something my daughter can go see when I’m gone.”

Dead To Me season 3 premieres Nov. 17 on Netflix.