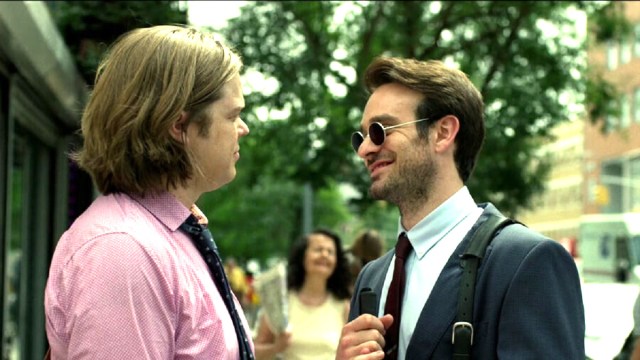 If Netflix’s three seasons of Daredevil taught us anything about Charlie Cox’s Matt Murdock, is that he either isn’t allowed to be happy, or he won’t let himself find personal and professional joy in light of his nocturnal activities.

The street-level vigilante couldn’t hold down a relationship with either Karen Page or Claire Temple based on his love for patrolling Hell’s Kitchen and beating criminals to a pulp with his bare hands, while it would be an understatement to call his dynamic with on again/off again, sometimes alive/occasionally dead love interest Elektra complicated.

However, after previously admitting all they wanted to do was see Matt get freaky in Disney Plus revival Born Again, Redditors have changed their tune and suggested a list of potential suitors instead. Based on the majority of top-voted comments and replies, it’s the bromance between Matt and longtime avocado Foggy Nelson that most fans want to see emerge victorious.

Based on how badly things have gone for Matt in the romantic arena already, coupled with how staunchly his old college buddy has stood by his side through thick and thin, you can completely understand why so many longtime supporters of Cox’s small screen adventures would happily see the platonic love between Nelson & Murdock win out in the end.

Of course, that doesn’t mean he’s not going to become a notch on She-Hulk’s bedpost in the next few weeks, but not every major superhero is obligated to have a major love interest thrown into their path, and it’s evident that Daredevil: Born Again would still win over the fandom were it to follow that path.