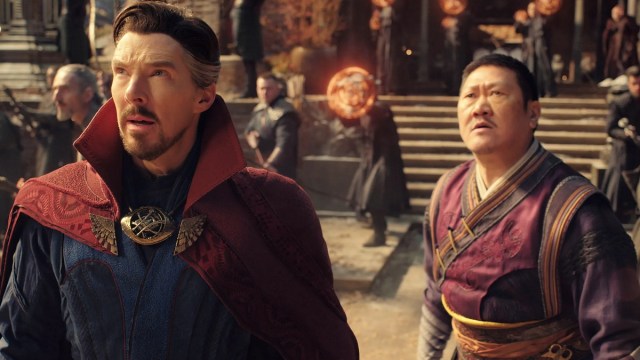 They might be the heroes, but often the Avengers cause their own problems. How many MCU movies at this point, from Captain America: Civil War to Spider-Man: No Way Home, are actually all the fault of the title character? In many ways, the same is true of Doctor Strange in the Multiverse of Madness, as one hilarious meme doing the rounds on Twitter reveals how Stephen Strange could’ve talked Scarlet Witch down in five minutes flat if he’d just given her a viable alternative.

As fans know, Wanda Maximoff’s reign of terror in the sequel was all to do with her determination to kill and drain the powers of America Chavez. But this meme points out that when Wanda initially makes her big ultimatum about America, Strange really should’ve just suggested that the pair of them team up to train the universe-hopping teen so that she can take Wanda to a world where her kids need a mother. Then everyone’s happy, and nobody gets hurt. Job done.

This would’ve been the Hallmark version of Doctor Strange 2.

The logic is sound.

To be fair, though, the movie does offer an explanation for why this wouldn’t work. Wanda explains at one point later in the film that she wants the power to hop across the multiverse herself in case her kids ever get sick and that universe doesn’t have a cure (which doesn’t really make a whole lot of sense, anyway, but whatever).

Plus, Strange isn’t one to talk when he nearly destroyed reality in No Way Home.

And sadly, this argument wouldn’t have worked as Wanda was too corrupted by the Darkhold to see reason.

With Doctor Strange 2 now streaming on Disney Plus, Marvel fans are revisiting the film and looking at it in a new light, with some even enjoying it more than they did in theaters. Although whether this meme is accurate or not seems to be a matter of opinion. Still, Marvel heroes clearly need to spend more time talking things over instead of just acting rashly. But then I guess that would make them the Adjudicators, not the Avengers.