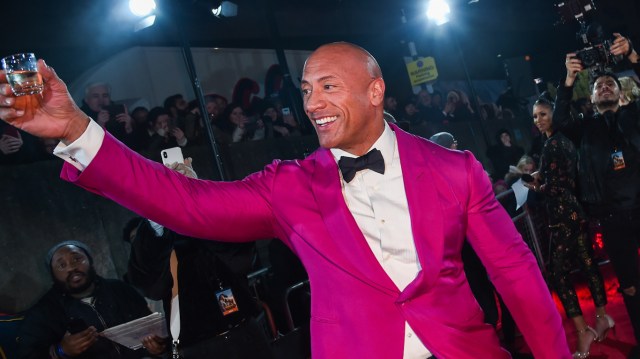 The Rock may know what’s cooking but his new co-star knows who’s been naughty or nice. The Black Adam star shared another sneak peek of his forthcoming all-star holiday action movie Red One to his Instagram, and this time he’s palling around with The Man With the Bag himself, Santa Claus, played by Spider-Man star J.K. Simmons.

The Rock aka Dwayne Johnson was characteristically effusive in the post, welcoming Simmons to what he’s promising will be the first film in a holiday franchise and shouting out not only Simmons’ Oscar-winning acting chops but also his now-famously shredded physique, saying the Whiplash star could pass as his twin.

The pics follow on the heels of Johnson’s last Red One themed Insta post, which featured fellow action hero and future co-star Chris Evans and showed the two clowning with each other behind the scenes. The stellar ensemble cast of the film also features Kiernan Shipka, Lucy Liu, It’s Always Sunny in Philadelphia‘s Mary Elizabeth Ellis, Nick Kroll, and Game of Thrones’ Kristofer Hivju.

Johnson and the rest of the film’s team are keeping the plot fairly close to their chests (imdb.com only says “Plot under wraps” in lieu of a synopsis) but Johnson has kept the director of the project no secret, shouting out Jake Kasdan in both his Instagram posts. The pair worked together twice before on Johnson’s two Jumanji installments.

Unfortunately, although Johnson is doing his part to keep his fans in the Christmas spirit, they will have to wait until next year’s holiday season to stream Red One on Prime Video. Until then the movie is labeled “Don not open ’til Xmas.”