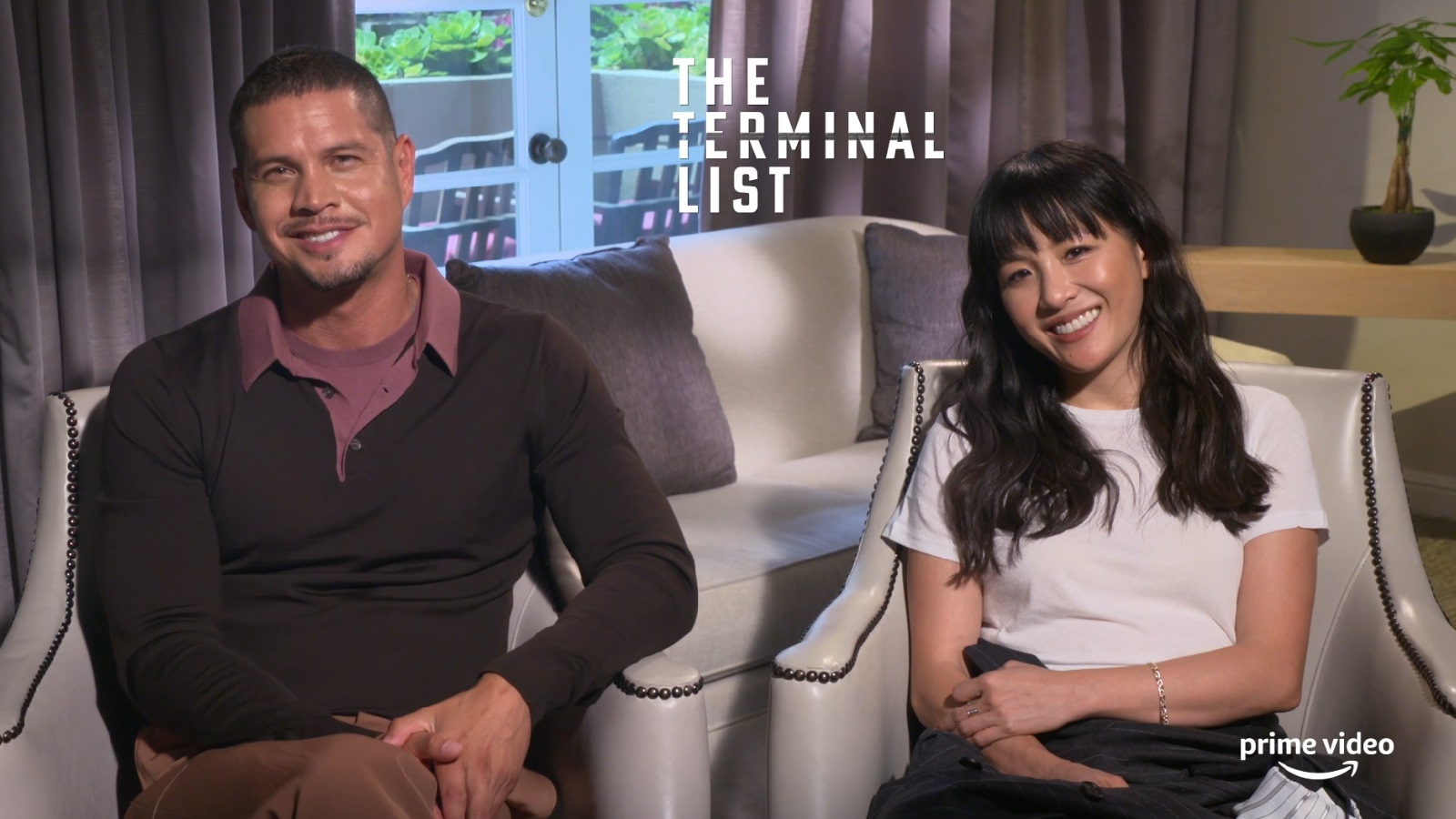 Star and executive producer Chris Pratt might be playing against type as traumatized soldier James Reece in Prime Video series The Terminal List, but he’s not the only one exploring new ground.

Best known for her work in the comedy genre thanks to wildly popular sitcom Fresh off the Boat, her Golden Globe-nominated performance in Crazy Rich Asians, and a leading role in the acclaimed Hustlers, Constance Wu stars opposite Pratt’s vengeful soldier as Katie Buranek, a reporter who forms several tenuous alliances in order to uncover the truth.

One of those frosty relationships is with Tony Layun, the federal agent hot on Reece’s tail played by JD Pardo. Famed for headlining Sons of Anarchy spinoff Mayans M.C. as Ezekiel “EZ” Reyes, and playing Toretto patriarch Jack in Fast & Furious 9, The Terminal List sees the actor on the right side of the law for a change.

Ahead of The Terminal List‘s premiere this coming Friday, We Got This Covered had the chance to speak to Pardo and Wu about the show. During our chat, we talked about putting a fresh spin on archetypal characters audiences might have seen before, getting to tackle new ground as performers, and their favorite moments from shooting, which you can check out below.

The journalist uncovering the story and the dogged fed are sort of broad, archetypal roles in a sense. Did you guys relish the challenge of being able to take something that audiences might have seen before and think they might know what to expect, but put your own unique stamp on it?

JD Pardo: Yeah, absolutely, I really wanted to. Because I knew that there was a moment where Tony steps into Reece’s world, and Tony becomes sort of this fish out of water, and recognizing that a lot of people watching it aren’t going to… they’re either not in the military, or don’t understand that part of it. So there was a responsibility to take them with me. So I felt like I really needed to make Tony as relatable as possible, and make people feel like that could have been them.

Constance Wu: And I think the whole series is… you don’t know what to expect. And that includes, to your point about our characters, characters that typically people think, “Oh, this is what we’re going to expect from the FBI agent or the journalist”. And plot-wise you don’t know what to expect, there’s a lot of fun twists and turns in this show. And also the same thing goes for the characters; the lengths they go to to meet their goals are continuously surprising, but also like so on character, you know, on point for character.

You both play characters that people might not have seen you tackle before, was it a rush to work on something like The Terminal List that offers so much variety and hits so many beats like action, thriller, espionage, politics, drama, and more, sometimes in the space of the same episode?

Constance Wu: Yeah, that’s the most fun is when you get to try to do something different than what you did before. You know, I’ve been saying that, like, my job before this was Hustlers, where I played a stripper! Which was really fun to delve into that world, [but] it was a very different world than being a war correspondent. And so that’s, you know, always challenging yourself as an actor, and also just getting to know different different points of view, different professions, and different kinds of people. And we really did, because we had real SEALs on set, real Green Berets you know? I mean, it was a great learning opportunity.

JD Pardo: Yeah, and for me, it’s like, we finished our fourth season of Mayans. So at that point, getting something new; it’s scary, it’s refreshing, it’s exciting. And there’s a little bit of an element of like, “Oh, yeah, I’m an actor. I’m not EZ Reyes”, you know? I’m an artist, and so I get to fill myself up with with other life. And I think it’s so important, because then you can come back and you just grow, just constant. So you’re growing.

The story keeps you guys apart for long stretches, but you end up becoming important to each other’s end game in ways you wouldn’t expect. So either separately, or together. Are there any scenes or sequences in particular that stands out as being personal favorites?

Constance Wu: I really like the scene where we’re at the beach house, and you’re questioning me.

Constance Wu: And you’re saying, like, crap, and I’m like, “Okay”. I’m like, “I dare you, motherf*cker”. And I’m like, “You think that I’m gonna mouse away?”. And, I liked that, because you were so strong. And like, you affected me so much, that it just like, it made me bring my A-game more. And it’s just so fun when like an actor’s so good.

JD Pardo: Oh, that’s awesome. That’s amazing. Yeah, that was great. Um, I think too, that was… that’s when I was just like, “Oh my god. She’s gonna make me look so bad”.

Constance Wu: No way! Nobody can make you look bad!

JD Pardo: My favorite, I think, we do have a scene later on where I think that because Tony has become so relentless, and he’s blinded almost by his pursuit, that it’s like he wants to shut everybody else out. And everybody else is a problem. He just wants to do it himself. And there’s this moment that we have where it just becomes like, like, “Okay, I’ll put my badge down. You put, like, why are we doing this? Like, why?”. And then there’s a connection there, that I feel becomes really strong, and almost like Tony is like, “Okay, we’re a team.”

Constance Wu: Yeah, yeah. That was really fun, too!

The Terminal List premieres on Prime Video this coming Friday, July 1. Make sure to check out our interview with stars Chris Pratt and Taylor Kitsch, and we’ll have more from the cast and crew of the series throughout the week, while you can check out our review here.