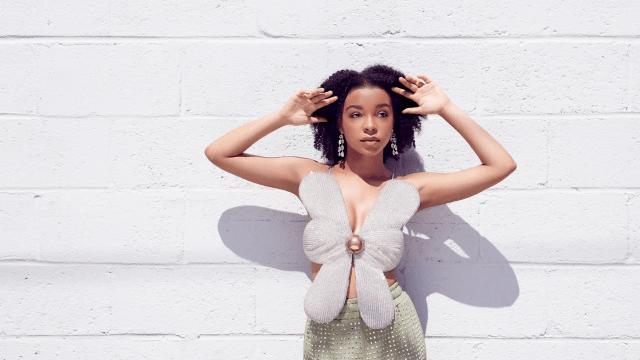 If you’ve ever felt like your life is a, and we quote, “dumpster fire,” and there’s not a lot you can do about it, a new Netflix adaptation is calling your name. 13: the Musical made its Netflix debut earlier this month, and it’s a relatable and toe-tapping watch.

The musical is based on the Broadway show 13 by Jason Robert Brown, who also played a role in the Netflix musical phenomenon. The cast is full of young talent, singing their hearts out and making it through the trials and tribulations of adolescence. We’re reminded of the struggle to fit in and fall in love, and of the beauty of friendship, and the nurturing and forgiveness it often needs. The lessons in 13 the Musical are plentiful.

One of the stand-out stars of the musical is Lindsey Blackwell, who plays Kendra — the friend everyone needs at 13. She’s kind and thoughtful, and even though Kendra struggles with the expectations her mother puts on her and the strict nature in which she parents her, Kendra has dreams, one of which is to finally kiss the boy she likes.

We got to speak with Blackwell about her role in 13 the Musical, and the extraordinary opportunity to work with Jason Robert Brown on the stellar project.

Blackwell is a talented actress, but she also loves to sing and use the platform she’s building for advocacy, especially for young women. From an EP she plans to release soon, to the work she’s done with Girls For A Change, you can learn more about her career and the exciting time she had creating everyone’s new favorite musical adpatation.

WGTC: 13: the Musical is such a coming-of-age story, but not in the way we normally see them being told. What about the project initially drew you to it?
Blackwell: Doing a musical is something I have always wanted to do, since I had the chance to be in a live theater production of Madeline’s Christmas. So, when I got the audition, I was super excited. It is such a blessing to be able to sing, dance, and act in a project. Plus, Kendra’s character was so very sweet and kind, and I totally felt like she and I had so much in common.

We’re living in an age where kids and young adults are freer than ever to dig into their emotions and stresses and sort through them instead of bottling them all up to fit a mold. 13 The Musical really embraces that. What was a favorite area of growth for your character, Kendra?
Blackwell: I think Kendra’s ability to forgive was my favorite area of growth for her. She was able to mend her closest relationships and move past her sadness into joy.

What was it like working with Jason Robert Brown?
Blackwell: Jason is the funniest person that I have ever met. He makes the most sarcastic jokes, but at the same time he is extremely uplifting and makes you feel confident in your skills and abilities. You know with him it is all love. I think one of the funniest things I remember him saying to me in rehearsals or during studio time was “take it to church.” Jason is the absolute best and just brilliant.

Did he have much involvement in the movie’s musical direction?
Blackwell: He was there with us, in rehearsals and pre-records, always coming up with some jazzy addition to the amazing stuff he already composed!

How did the vocal coach work with you on ensuring the songs were sung healthily since there can be quite a bite with some numbers?
Blackwell: We had an amazing vocal coach, Chris York, that would do our zoom sessions with us and teach us the best techniques to achieve the tone we needed, hit the notes, really protect our voices. One of my favorite memories with Chris is when we would change the beginning consonant of a word to make the note easier to hit, but the funny part is how weird it would sound. I also think at one point he had me singing through a straw… the things we do to hit that note.

Have you ever been the new kid at school? How did you cope with that?
Blackwell: I have been the new kid at school, and thankfully I don’t have any horror stories from my first day as a new kid. However, for the first day of fifth grade at a new school, I wore a mohawk with buns. People wouldn’t stop saying the buns look like meatballs; it’s kind of funny now, but it definitely wasn’t funny to me then.

For anyone who isn’t familiar with 13 The Musical, how would you describe it in 3 words?
Blackwell: 13: The Musical in 3 words, wow, that’s hard. I think I’d go with wholesome, upbeat, and diverse.

Were you a fan of the production before you signed on for the Netflix adaptation? If so, did you have any favorite songs/characters?
Blackwell: Before signing on with Netflix for the role of Kendra, I was familiar with 13 and knew that Ariana Grande and Liz Gillies made their debut on Broadway and went on to have amazing careers. I also knew that Jason Robert Brown was an amazing composer, and I was so excited to be able to work with him. Now, I am a huge fan, of course, and I love that I am a part of bringing a new song and storyline to life with Kendra and “I’ve Been Waiting”!

Kendra really wants things to work out with her crush, Brett, including getting that highly-anticipated first kiss. She also feels a little bit stuck because her mother is quite strict — did you relate to anything Kendra went through in the adaptation? If not, is there another character who you related to more?
Blackwell: I can relate to Kendra’s kindness and her being able to forgive people after an apology. I would say I’m a forgiving person if people deserve forgiveness. Lucy and Brett both apologized for where they went wrong, and Kendra was able to step back and accept their apologies.

Tell us about your work with Girls For A Change. We read more about the organization, and its mission is incredible.
Blackwell: Girls For A Change is an organization that focuses on giving young girls the support they need as they enter womanhood. Their mission is to prepare Black girls for the world, and the world for Black girls. I am a proud advocate of GFAC because I believe that as young women, we need a space free of judgment where we can be our complete selves. The staff and girls participating are such a joy to be around.

Between acting and your accolades in school, it seems like you’re not just balancing a lot — but genuinely embracing all of your dreams and achieving success in so much. How do you balance so much at such a young age?
Blackwell: Balancing it all can be tough at times, but allowing personal time for myself really makes the difference. I will forever emphasize the importance of self-love and a little alone time! I love doing my hair and nails, so I make the time to do so!

You’ve also worked on projects like Council of Dads (which we loved), The Change-Up, and Temptation: Confessions of a Marriage Counselor — is there a genre of acting you’d like to explore more of? Which has been the most fulfilling so far?
Blackwell: I definitely want to explore comedy more because people always say I’m kind of funny, and I believe them. Drama is always the most fulfilling because there are so many chances to touch your audience in a positive way through relatable moments. I always love doing drama productions.

Working on a musical aligns with your other passions of piano playing and singing. How has it been crafting your debut EP?
Blackwell: Working on my EP was such a blast. Music is a really big part of my life, and being able to professionally put my voice out there is unbelievable! My first single came out on August 19, and I am extremely grateful for the support from my fans. The response from people definitely made me want to put out more music in the future! Be on the lookout for my EP coming soon.

Last but not least, what do you most hope fans take away from 13 The Musical?
Blackwell: I hope fans realize that, more times than not, everyone deserves a second chance. 13: The Musical really does a great job of showing how important forgiveness is and also never to take your friendships for granted!

It’s easy to forget how lucky we are to have strong friendships, and it can be hard to offer forgiveness when we’ve been wrong. Blackwell’s takeaway from the film is one that viewers of all ages can benefit from being reminded of.

You can see Netflix’s adaptation of 13: the Musical on the streaming platform now, and it’s a beautiful watch for family and friends.