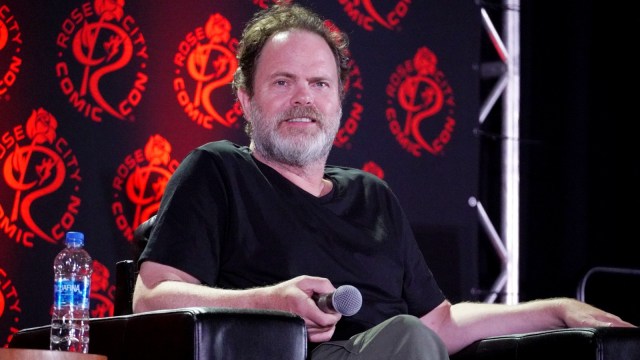 We’ve probably all met somebody who reminds us of Rainn Wilson‘s Dwight Schrute from The Office, but was he based on a real person?

Wilson recently addressed this very question at a panel he hosted at Rose City Comic Con in Portland, Oregon. In order to help jog his memory, Wilson enlisted the help of a friend from high school, Steve, who happened to be in the audience of fans in the packed ballroom at the Oregon Convention Center.

“Steve, […] when you saw Dwight, how much did you recall our endless years of Dungeons & Dragons games and the personalities that were around that table?” Wilson asked his longtime friend, who was positioned in front of a microphone in the audience.

“I would say, as an amalgamation, that’s pretty spot on,” Steve replied. Wilson went on to explain that one person in the friend group particularly inspired Dwight and was similarly a big fan of Battlestar Galactica.

“I think fondly of Chris Cole, especially, who was very officious, and he literally…people don’t believe me and they can’t wrap their head around this. But this was like 1979-1980, he had glasses that said on the side…they were regular glasses, they looked like Dwight glasses but they were regular glasses, on the side it said: Battlestar Galactica. For some reason it was one of the first, like, cross-pollinations between like a TV show and a merchandise. And so he had Battlestar [glasses] and we would mock him mercilessly and go ‘pew, pew, and they shoot lasers? pew pew’ And he’d be like, ‘shut up, f**k you. Anyway, it’s my roll, I want the barbarian to attack the Orc.'”

Wilson’s Battlestar Galactica-loving D&D pal eventually joined the Marines and played the cornet in their marching band, the actor said. When Wilson asked Steve if there were any people that reminded him of Dwight, Steve said their Dungeon Master, Tim Higgins, due his characteristic of being “unintentionally cruel.”

“I’m a little worried that Tim is here,” Steve added.

“If Tim is here, you’re dead. He was scary,” replied Wilson.

During that same panel, Wilson revealed other little-known facts about Dwight, such as the fact that he imbued the character with a poor sense of spatial awareness. This resulted in making scenes quite awkward for the other actors, in particular Jenna Fischer, who he would routinely stand way too close to for comfort. While Wilson was almost the star of his own spinoff show from The Office, called The Farm, the backdoor pilot wasn’t successful enough to launch its own show, which the actor partially blamed on the episode in question being far too short to cram in all that was needed to set up such a series.