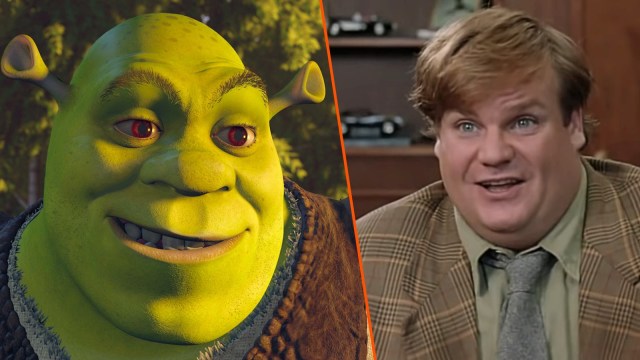 Images via DreamWorks and Paramount Pictures. Remix by Danny Peterson.

Before Mike Myers became the king of the swamp in 2001’s DreamWorks film Shrek and its many sequels, Chris Farley was attached to the project to lend his energetic voice to the titular computer-animated ogre before the beloved actor and Saturday Night Live alum tragically died of a drug overdose in 1997. Now, thanks to some enterprising lost media enthusiasts, more test footage has surfaced online from the Farley era of Shrek’s journey to cinema screens.

In a blog post by Meghan Boilard, the winding journey of how the newly uncovered footage surfaced online is recounted in excruciating detail. Though an initial animatics test, featuring hand-drawn storyboards accompanied by Farley’s voice, had come to light back in 2015, as CNN reported, this latest footage is actually rendered in CGI and sheds light on the character’s earliest polygonal designs. Below is the hand-drawn storyboard footage that features Farley’s voice, in case you missed the now-viral clip when it first came to light back in 2015.

Following that discovery, the YouTuber unclesporkums located an expired eBay listing for another storyboard sequence from the Farley era of Shrek, in which the character apprehends a mugger while singing the James Brown single “I Got You (I Feel Good).” After much speculation generated from the supposedly lost sequence, which came to be known as the “I Feel Good” scene, another eBay listing came to light that seemed to confirm the existence of a video clip version, by way of an unmarked VHS tape whose description clarified that Farley’s voice had been removed after his passing, but that you could still “‘lip-read’ him at the end saying ‘Bite Me!'” to the mugger, whom he had flung into the moonlit sky by the neck.

However, despite the vivid description of the scene in the eBay listing, it was still uncertain whether the clip would ever be publicly released online. As Boilard explained in the blog post,

“The only problem? By the time this listing was unearthed by lost media enthusiasts, it had already been sold – likely to a private collector unwilling to leak the animation online. The promising lead culminated in a dead end.”

However, enterprising Shrek historians eventually did locate different versions of the clip this summer, after five years of searching, when Lost Media Wiki user DingleManBoy “discovered 31 previously unseen ‘I Feel Good’ frames on the Vimeo demo reel of an animator associated with Shrek‘s pre-production,” the blog post explained. Two Reddit users, Hotter_Cooler and AccomplishedWorld823, also found another animator’s Vimeo reel featuring a different version of the same scene. You can watch both clips below, neither of which contain Farley’s voice, sadly.

The second clip that was found also featured the mugger character getting flung into the sky by Shrek.

After that, even more snippets of clips were found by lost media enthusiasts, including one piece of test footage that actually paired a CGI model of Shrek with Farley’s voice, something Boilard noted as being “the most remarkable,” despite the clip being in such a primordial state that “Shrek’s clothes have yet to be added and the green humanoid mass is set against an entirely black background.”

After all these years, there’s still an incredible range of emotion in the brief clip that Farley brings to the character that makes us wonder what could’ve been had he been the voice of Shrek in the finished film.