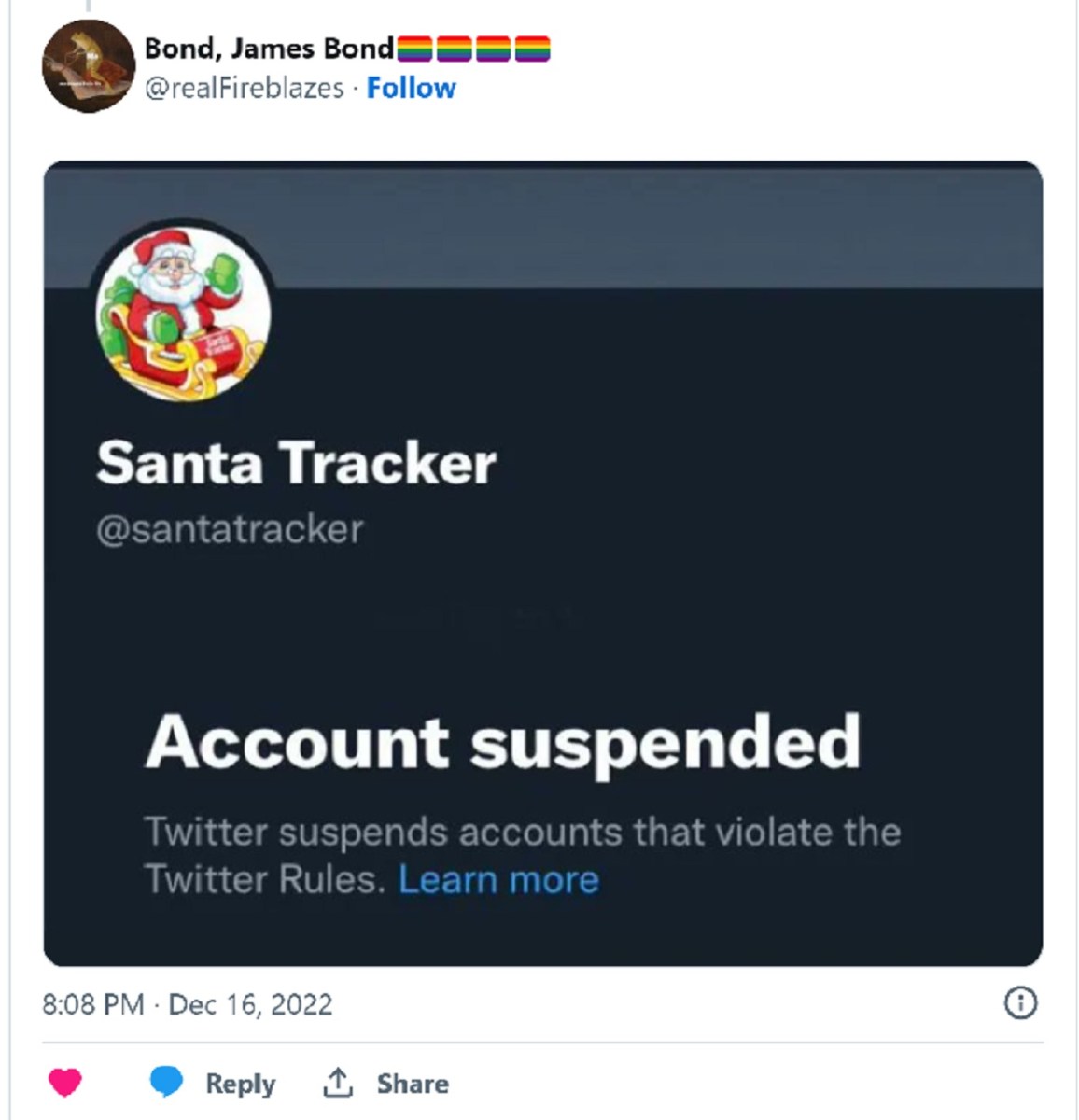 It’s sing-a-long time! “You’re gonna regret/You better not spy/Don’t track my jet/I’m telling you why/Elon Musk is banning you now!” There you have the next great holiday classic. You’re welcome.

For many families, tracking Santa Claus’ whereabouts on Christmas Eve has become a longstanding tradition. Instead of tuning into the television networks, the digital age allows for real-time updates straight from the NORAD Santa Tracking Twitter account. After Musk claimed that he would suspend any and all “doxxing” accounts, smart asses worldwide are questioning if that will include jolly ol’ Saint Nick.

Despite posting claims that he would allow all manner of free speech on the platform, Musk has been trigger happy when it comes to doling out lifetime suspensions. Not long after he took charge, he shut down several accounts that taunted his new pay-to-play verification system. In the past week alone, he’s suspended the accounts of notable journalists critical of him. However, it was a 20-year-old Florida college student that had the world buzzing.

Jack Sweeney made himself an internet sensation by tracking all the flights for Musk’s Gulfstream private jet. Using public flight data, Sweeney set up a Twitter account that would automatically post whenever the billionaire’s jet left from or arrived at an airport. Despite the Twitter boss posting that he would uphold his vow of free speech, including doxxing accounts following his jet, he still hit Sweeney’s account with a lifetime ban.

Ever since Musk took control of Twitter, it’s been nothing but controversies. Whether it’s lifting lifetime bans on some seriously questionable accounts, making a public spectacle of mass layoffs at Twitter headquarters, or charging a fee to get the sketchy blue verified check mark, there’s never a shortage of triggering headlines where the billionaire’s social media takeover is concerned.

For the record, NORAD Santa Tracker has not been suspended. For that matter, Musk took a public poll to decide the tweeting future for the journalists’ accounts that he had previously banned.

After the public voted to lift the suspensions, Musk allowed them back onto the platform, though his point was made: He bought Twitter to do two things—ban accounts and chew bubblegum…and he’s all out of bubblegum.