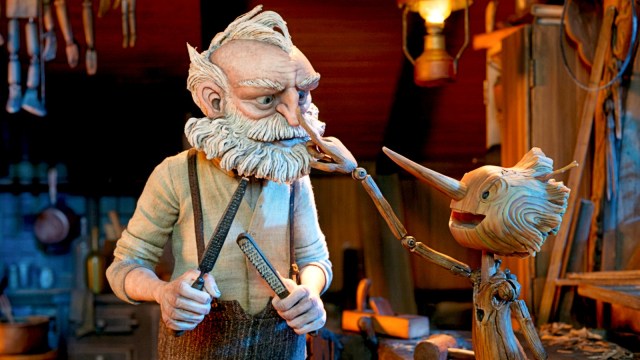 Pinocchio is more than a movie about a wooden boy’s adventures. It’s a movie, to quote Sebastian, about “imperfect sons and imperfect fathers,” the futility and impotence of fascism, and the transcendent power of love above everything else. While a lesser movie would have been crushed by the weight of these themes, Pinocchio manages to carry them all with relative ease.

Heart is hard to come by, nowadays. More often than not, retreading familiar ground has become calculated and commonplace, with IP mega franchises, nostalgia-laden reboots, and less room for fresh stories with a soul. Thankfully, Guillermo del Toro’s Pinocchio is a standout among the twenty-plus film adaptations of Carlo Collodi’s 1883 tale that have been made so far. Moving the story from the late 1800s to 1930s fascist Italy, Pinocchio takes a story we all know and love and gives it the opportunity to have a new, poignant perspective. Del Toro and co-director Mark Gustafson understand the need to hit familiar story beats while imbuing a well-loved story with their own sensibilities, making something truly magical in the process.

Before we meet the beloved wooden puppet, we first meet writer-adventurer Sebastian J. Cricket (Ewan McGregor), our narrator and Pinocchio’s eventual conscience. It’s through Sebastian that we learn about Geppetto (David Bradley), a carpenter who’s lost his son and left to wallow in his grief. When a Wood Sprite (Tilda Swinton) sees that Geppetto has made a wooden boy in his workshop in a fit of drunken heartbreak, she gives the wooden creation the gift of life and a mission: to be the carpenter’s son and the companion Geppetto so desperately needs. In the morning, Pinocchio (Gregory Mann) awakens, and Geppetto’s wishes are answered — but in a much more complicated way than he could have ever imagined. The wooden boy is enticed by the new world around him, eager to soak it all in, willing to defy his new papa to follow his curiosities, and asking about absolutely everything around him. However, this curiosity and hunger to experience the outside world makes Pinocchio a target for fascists in the small town where he and Geppetto live, who would rather have everyone simply obey. The fascists aren’t the only ones who want Pinocchio, though. There’s Count Volpe (Christoph Waltz), a struggling carnival owner who wants to make the wooden boy his star – and main cash cow. Through all of this, Pinocchio has to learn to navigate the complicated nature of life, love, death, and what it means to be a real person.

Pinocchio is a triumph, as an adaptation, as del Toro’s first time directing animation, and as a story about life and loss. The pitch-perfect performances of the entire cast are one of the many things to love about this film, but the standouts come from Bradley, who gives Geppetto a gruff but gentle humanity, and Mann, who excels at bringing so much life and energy to Pinocchio. Cate Blanchett also puts in a delightful and soulful turn as Spazzatura, Count Volpe’s right-hand monkey at the carnival, making for my second favorite performance of hers this year.

Another aspect to love is the film’s animation and art direction. Made using a mix of stop-motion animation and digital effects, Pinocchio has a hand-made quality to it, with the animated figures evoking actual wooden carvings. It’s stunning to watch in our main cast of characters throughout the film, but especially in character designs for the Wood Sprite and another eternal creature Pinocchio meets in the afterlife. The two seem to take their influences from biblically accurate angels, ancient mythology, and del Toro’s well-known design sensibilities. They are stunning, adorned in endless blinking eyes and feathers, crowned with enormous horns, and colored a deep cerulean — these eternal beings are a worthy addition to del Toro’s already mesmerizing stable of creatures.

Perhaps the most incredible feat the movie pulls off is balancing heavy existential themes with the lightness of a child’s curiosity. There are dark, heavy moments here: we spend some time in a fascist training academy for young boys at one point, and the first scenes of Pinocchio’s awakening call to mind Frankenstein inadvertently wreaking havoc in his village in his first moments of life (an intentional parallel from del Toro). However, there is beauty and pathos in it as well. Pinocchio is more than a movie about a wooden boy’s adventures. It’s a movie, to quote Sebastian, about “imperfect sons and imperfect fathers,” the futility and impotence of fascism, and the transcendent power of love above everything else. While a lesser movie would have been crushed by the weight of these themes, Pinocchio manages to carry them all with relative ease. There’s charm in spades (even in the film’s musical numbers, which are thankfully delightful), and soul to spare — a rarity worth relishing.

Pinocchio is more than a movie about a wooden boy’s adventures. It’s a movie, to quote Sebastian, about “imperfect sons and imperfect fathers,” the futility and impotence of fascism, and the transcendent power of love above everything else. While a lesser movie would have been crushed by the weight of these themes, Pinocchio manages to carry them all with relative ease.